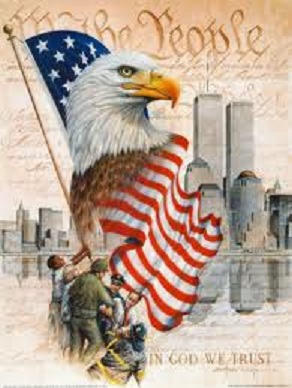 America used to mean something. The Statue of Liberty represented independence, what it meant collectively to be an American. There was a reason why millions risked life and limb to come to our shores. We are a nation of immigrants with a strong work ethic. America was built on hard work, sweat, self-determination, and freedom. We were free and we were proud to be Americans.

We are not who liberals decide us to be. We are not children who need to be told by the government how to live and to be shameful and apologetic about our American exceptionalism. We are patriots and love our country because we feel so in our hearts, because we are free. We are not children who have to stay in their parents’ homes until the age of 26, finding ourselves, because some misguided elected official says we should be on welfare and free healthcare.

If we give to the less fortunate, it is because we want to give, not because the Democrat Socialist (my words) thinks that we must spread the wealth and re-distribute it according to some grand, global scheme, punishing us for our “evil capitalist” ways. Most middle class Americans have worked hard for what they have, why should they find themselves broke when nearing retirement because progressives think that “social justice” must be implemented.

Our Constitution guards and protects private property. Who are United Nations and all its progressive affiliates to tell us that private property is the root of discrimination and must thus be abolished, stolen, and re-distributed to the poor of the world? The Bible says, “Thou shall not steal.”

Who made progressives the arbiters of the American Dream?

Who made progressives the arbiters of the American Dream? What if we do not want to live a simpler life and we like our lives just the way they are, consumerism and all, good or bad? Are they going to come and force us to change to their vision of what living should be? Our consumerism keeps millions of Chinese and Americans financially secure and employed.

Not all Americans have personal possessions to sell, savings to rely on, or rich relatives, we have to work. We cannot take time off to find ourselves in a foreign land, on a mountain peak, an African village, or on the open sea. I personally like what I do. When you really like what you do, you do it free. Moreover, I do not want someone else telling me what I like.

Flooding our country with billions of dollars in stimulus spending or dollars not backed by goods and services is not going to solve our problem. It will cause further debt and inflation. There is something wrong with what we teach our children. We no longer teach them to be self-sufficient, to seize the opportunity, “Carpe Diem,” we teach them to expect cradle to grave mentality, dependence on the nanny state because it is a “right” and an “entitlement.”

Free healthcare is not a right

Free healthcare is not a right. Healthcare is a service like any other service that we must pay for. Who says that a doctor who spent 12 years in college to become a doctor and half a million dollars in tuition fees and books suddenly owes you free care? Are you going to clean his house, mow his lawn, do his laundry, and fix his computers free of charge?

The American culture is not about non-producers living off the producers. This is not who we are. Maybe it is what lefties want us to be, pining for European lifestyles that are failing left and right, no pun intended. We were somebody when we believed in free market capitalism. We thrived when we believed in the American spirit, in individuality, in freedom of choice, of religion, of speech. We are in such disarray; we are no longer that nation. We have to get our public policy in order so we can be that nation again. We have to get rid of all corrupt politicians on both sides.

The status quo is no longer an option

The status quo is no longer an option. It has demoralized the country because we no longer see a solution to the myriad of problems that are being created at a very fast pace every day. We are a divided population in crisis right now, saddled by immense debt. We have to go back to the values that made this country great. There is no other way to extricate ourselves from this quandary. Furthermore, we do not want a one world government that the ruling elites are pushing. Our Constitution and our legal system are incompatible with
Sharia Law. We have to stop its spread in this country. We cannot have two legal system in America, it is not who we are.

Health insurance is a moral hazard not a right

Health insurance is a moral hazard not a right. You choose to purchase it and use it a lot or you choose to take your chances that you will not get sick and save your money for other emergencies. Nothing is free, there is an opportunity cost associated with any activity. Somebody has to produce housing, healthcare, education, food, otherwise it does not exist.

The American culture was not steeped on spending trillions more dollars than we actually take in taxes.
Turning one group of society against another is not the American culture that our fore fathers built. Turning people against the rich is hatred and class division pure and simple, it is not a logical solution to the out-of-control spending.

The rich pay plenty of taxes and so does the middle class. It is true that the bottom 47 percent of income earners pays little federal and state tax but they do pay sales taxes. The problem is that the government is spending us shamelessly into oblivion with each year’s base line budgeting and they do not seem to want to stop in spite of citizens’ protests. We also pay lavishly for illegal aliens and their children, it must stop, their home countries have to take care of them. We should give them emergency care, but the rest is up to their countries. Their anchor babies should not be our responsibility.

If we confiscated everybody’s wealth and income in the nation, it will offset spending and the national debt ($14 trillion) for about a year. What will we do after that? Who is going to create jobs and thus a national income? Do we revert to hunter-gatherer society?

← Desensitized and Devalued
Never Agree to a Police Search →