Speaking at the NAACP convention in 2010, Rep. Shelia Jackson Lee (D-TX) said the Tea Party had ties to the KKK.

“I’m going to be engaging you with those very powerful numbers that you have offered on what the tea party recognizes, uh, or is recognized as. Might I add my own P.S.? All those who wore sheets a long time ago have now lifted them off and started wearing [applause], uh, clothing, uh, with a name, say, I am part of the tea party. Don’t you be fooled. Those who used to wear sheets are now being able to walk down the aisle and speak as a patriot because you will not speak loudly about the lack of integrity of this movement. Don’t let anybody tell you that those who spit on us as we were walking to vote on a health care bill for all of America or those who said Congresswoman Jackson-Lee’s braids were too tight in her hair had anything to do with justice and equality and empowerment of the American people. Don’t let them fool you on that.”

This was and is another false accusation coming from the Democratic Party.

The original targets of the Ku Klux Klan were Republicans, both black and white, and for decades they harassed the GOP with lynching and threats. Not only did the Democrats work hand-in-glove with the Ku Klux Klan for generations, they started the KKK and endorsed its mayhem.

The first grand wizard of the KKK was honored at the 1868 Democratic National Convention, no Democrats voted for the 14th Amendment to grant citizenship to former slaves.

Woodrow Wilson was a Democrat racist, and it was he who premiered the movie ‘Birth of a Nation’ in the White House. The movie, based on a racist book written by one of Woodrow Wilson’s racist friends from college, spawned the modern-day clan.

In fact, the KKK was created as the terrorist-wing of the Democrat party. (Bet you didn’t learn that in school) It’s goal was to kill all blacks — and some whites — who were either active in Republican politics or educating black children.

The Klan burned crosses and murdered thousands of Republicans and Democrats, white and black. It wasn’t until Ulysses Grant destroyed the KKK with the Ku Klux Plan Act of 1871.

Later, the movie inspired some Democrats from Georgia who revived the Klan and the KKK once again became a powerful force within the Democrat Party.

In 1924 at the Democrat Convention, the KKK was so dominate that the Republicans called it the Klanbake.

Again in the 1950’s, the civil rights movement struggled against Democrat Klansmen. Notorious police commissioner Bull Connor, who attacked African-Americans with dogs and clubs and fire hoses, was both a Klansman and the Democratic Party’s National Committeeman for Alabama.

In the 1980s, the Democratic Party elevated Ku Klux Klan recruiter Senator Robert Byrd (D-WV), to third in line for the presidency.

Robert Byrd, born Cornelius Calvin Sale, Jr, recruited 150 of his friends and associates to create a new chapter of the Ku Klux Klan, and held the titles Kleagle (recruiter) and Exalted Cyclops. 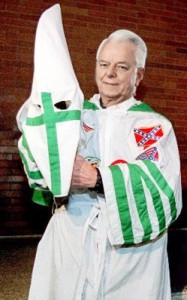 “I shall never fight in the armed forces with a Negro by my side … Rather I should die a thousand times, and see Old Glory trampled in the dirt never to rise again, than to see this beloved land of ours become degraded by race mongrels, a throwback to the blackest specimen from the wilds.” Robert C. Byrd, in a letter to Sen. Theodore Bilbo (D-MS), 1944

In 1946 or 1947, Byrd wrote a letter to a Grand Wizard stating, “The Klan is needed today as never before, and I am anxious to see its rebirth here in West Virginia and in every state in the nation.”

In 1997, in his last autobiography, Byrd explained that he was a KKK member because he “was sorely afflicted with tunnel vision—a jejune and immature outlook—seeing only what I wanted to see because I thought the Klan could provide an outlet for my talents and ambitions.”

Byrd also said, in 2005, “I know now I was wrong. Intolerance had no place in America. I apologized a thousand times … and I don’t mind apologizing over and over again. I can’t erase what happened.”

The Republican Party has been a stanch enemy of the Ku Klux Klan, the terrorist wing of the Democratic Party.

Historical documents are unequivocal that the Klan was established by Democrats and that the Klan played a prominent role in the Democratic Party. In fact, a 13-volume set of congressional investigations from 1872 conclusively and irrefutably documents that fact.

So the truth is; it was the Democrats who replaced their white sheets for Democrat Party clothing.

Our nation’s top historians reveal that the Democratic Party gave us the Ku Klux Klan, Black Codes, Jim Crow Laws and other repressive legislation which resulted in the multitude of murders, lynchings, mutilations, and intimidations (of thousands of black and white Republicans). On the issue of slavery: historians say the Democrats gave their lives to expand it, the Republicans gave their lives to ban it.

Thaddeus Stevens, a Radical Republican that introduced legislation to give African Americans the so-called 40 acres and a mule and Democrats overwhelmingly voted against the bill.

After exclusively giving the Democrats their votes for the past 25 years, the average African American cannot point to one piece of civil rights legislation sponsored solely by the Democratic Party that was specifically designed to eradicate the unique problems that African Americans face today.

As of 2004, the Democrat Party (the oldest political party in America) had never elected a black man to the United States Senate, the Republicans had elected three.

It wasn’t only Republicans and Blacks the KKK resented, The group specially contests the immigrants coming to America in large number, especially Italians and Jewish.

According to the KKK website, the clan was also a financial and political enginery that allowed the leaders of it to become the richest persons in America. The KKK, with the help of the Democratic Party manages to organize a demonstration right in the middle of Washington, with over 30 000 knights participating. It is the biggest demonstration of force recorded in the KKK history and one of the saddest periods of America. Ku Klux Klan is indeed a powerful organization, and according to the KKK website, they were allowed to do practically anything.

Note: Planned Parenthood Margaret Sanger (who is a heroine by the left) was a HUGE racist,

who created Planned Parenthood for the sole purpose of EXTERMINATING THE BLACK RACE.

On blacks, immigrants and indigents:

“…human weeds,’ ‘reckless breeders,’ ‘spawning… human beings who never should have been born.”

Exposing the fascist thinking of Margaret Sanger. Her left-wing sisters, such as Gloria Steinem, had to selectively overlook this part of Margaret Sanger when they praise her feminist achievements.Ms. Sanger began her career as a nurse and political rebel, acting in association with the International Workers of the World (IWW) and with Emma Goldman, foundress of the American Communist Party. (Ms. Goldman also mentored Roger Baldwin, founder of the American Civil Liberties Union – ACLU)