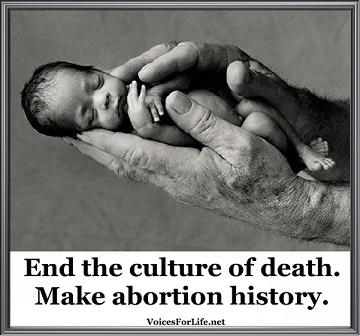 Excerpts from what has been described as the “the greatest pro-life speech ever given,” at the close of the 2008 National Right to Life Committee, by Richard John Neuhaus.

Against the encroaching shadows of the culture of death, against forces commanding immense power and wealth, against the perverse doctrine that a woman’s dignity depends upon her right to destroy her child, against what St. Paul calls the principalities and powers of the present time, this convention renews our resolve that we shall not weary, we shall not rest, until the culture of life is reflected in the rule of law and lived in the law of love.

The culture of death was an idea before it was a deed. The contention between the culture of life and the culture of death is not a battle of our own choosing. We are not the ones who imposed upon the nation the lethal logic that human beings have no rights we are bound to respect if they are too small, too weak, too dependent, too burdensome. That lethal logic, backed by the force of law, was imposed by an arrogant elite that for over forty years has been telling us to get over it, to get used to it.

“We the People” have not and will not ratify the lethal logic of Roe v. Wade. That notorious decision of 1973 is the most consequential moral and political event of the last half century of our nation’s history. It has produced a dramatic realignment of moral and political forces, led by evangelicals and Catholics together, and joined by citizens beyond numbering who know that how we respond to this horror defines who we are as individuals and as a people. Our opponents, once so confident, are now on the defensive. Having lost the argument with the American people, they desperately cling to the dictates of the courts. No longer able to present themselves as the wave of the future, they watch in dismay as a younger generation recoils in horror from the bloodletting of an abortion industry so arrogantly imposed by judges beyond the rule of law.

We do not know, we do not need to know, how the battle for the dignity of the human person will be resolved. God knows, and that is enough. . . We know that in a sinful world, far short of the promised Kingdom of God, there will always be great evils. The principalities and powers will continue to rage, but they will not prevail.

In the midst of the encroaching darkness of the culture of death, we have heard the voice of him who said, “In the world you will have trouble. But fear not, I have overcome the world.” Because he has overcome, we shall overcome. We do not know when; we do not know how. God knows, and that is enough. We know the justice of our cause, we trust in the faithfulness of his promise, and therefore we shall not weary, we shall not rest.

You can read the speech in full at the link provided.