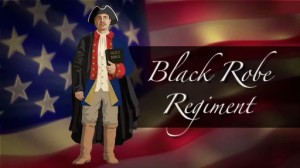 There was a time in America when we had pastors and preachers in the similitude of Old Testament prophets. They were men who helped forge a land of freedom. Furthermore, they helped insure that in the United States there was “No king but Jesus.” They feared no one but God, and they loved liberty from the depths of their souls. And they made sure that in this country no civil magistrate could ever tell the pulpit to “shut up.”

The relationship between the throne and the pulpit has always been a tenuous one.  Since the days of Melchisedec, God intended that the office of priest and king be separate.  Old Testament kings learned the hard way not to intrude into the priest’s office.

God clearly intended that His prophets be free and independent men who possessed as much courage as they did faith. Reading the scriptural record of the Old Testament reveals that the prophecies and warnings of the prophets were aimed as much at the throne as at the village. And, more often than not, these prophecies were not well received (putting it mildly) by ancient Israel’s equivalent to 1600 Pennsylvania Avenue.

King Amaziah commanded the prophet Amos to “prophesy not,”  and King Jeroboam attempted to kill him.   Fortunately, God miraculously protected His man.   King Ahab and Queen Jezebel tried to kill Elijah.  Ahab’s last act was to imprison the prophet Micaiah.  Ahab’s son, King Ahaziah, tried to arrest Elijah three times and lost over 100 men in the process.  Ahab’s second son, King Jehoram, tried to kill the prophet Elisha. King Joash killed Zechariah.  King Amaziah beat God’s prophet into silence.  King Jehoiakim killed Uriah. The prophet Jeremiah spent more time in prison than he did out.  Israel’s kings falsely accused him, hated him, mocked him, persecuted him, and repeatedly imprisoned him. They even attempted to murder him, and without divine protection, would no doubt have succeeded. The prophets Amos, Micah, and Isaiah all record Israel’s kings as telling them to “prophesy not,” or in modern parlance, to “shut up.”

So egregious were the persecutions against God’s prophets by Israel’s kings that Jesus stood outside the capital city of Jerusalem and declared, “O Jerusalem, Jerusalem, thou that killest the prophets, and stonest them which are sent unto thee.” (Matthew 23:37).

Likewise, the early church was birthed in a baptism of persecution.  And the story of the church throughout history has, for the most part, been one of governmental persecution, oppression, and tyranny against believers.  Some of them were unable to defend themselves and were led away as sheep to the slaughter. Others resisted with force. Of these, some prevailed, threw off the oppressor, and lived in peace; while some fell on the battlefield, choosing to die as free men than live as slaves.

The history of America reflects the struggle of religious men to live free of the king’s tyranny.  First, the pilgrims came to these shores fleeing persecution. Then, the patriots bled and died on these shores fighting persecution.  The result was a land of liberty in whose founding documents are enshrined the eternal principles of liberty. Chief among those principles was the divine principle that the throne must stay out of the pulpit, that no more could the king tell the prophet to shut up.

But there is more than one way to silence a man. If coercion and intimidation won’t work, bribery is always an option. In  the 1950s, then US Senator Lyndon Johnson cleverly employed both tactics when he introduced and helped pass what we now know as the 501c3 non-profit, tax-exempt corporation status for churches. Suddenly, free and independent church bodies became creatures of the state.  Pastors, elders, deacons, etc., were no longer offices of the church; they were now corporate officers, authorized and sanctioned by the state.

Just as Ahab had his gaggle of bought-and-paid-for prophets, so, too, now Lyndon Johnson and his fellow would-be kings had successfully bought and paid for the silence of the pulpit.   And the perks were good. These state-owned preachers were able to launch radio and television programs, build schools and universities, and enjoy the approbation of heads of state.

Wealthy corporate heads were happy to provide vast sums of money to these state-approved “ministries.” The state even generously provided faith-based taxpayer money to their approved churches. Compliant pastors were called to the White House for lavish banquets and private meetings. The marriage between throne and pulpit was complete. It was a small price to pay: all the prophets had to do was “shut up.”

Just as Pharaoh had the religious wizards Jannes and Jambres to withstand Moses,  modern heads of state have their religious wizards to stand against those patriot-pastors who dare to oppose them.  These hireling-wizards even dare to proclaim that America’s Founding Fathers were sinful when they resisted the tyranny of King George.  They mingle the magic potion of pacifism by twisting Romans 13 and other scriptures to promote the damnable doctrine of submission to oppression.  If they mention the great Swiss reformer Zwingli at all, they fail to mention that he died on the battlefield–sword in hand–defending religious liberty.

They condemn the heroic efforts of courageous preachers such as Germany’s Dietrich Bonhoeffer and Martin Niemoller. They cast aspersion upon the sacrifices of American patriot-pastors such as Jonas Clark, James Caldwell, John Peter Muhlenberg, Joab Houghton, John Witherspoon, and John Leland. Yes, they are willing to sacrifice the lives and liberties of their own offspring in order to eat well at the king’s table. And eat well they do.

Everyone now seems concerned about the way the IRS sought to intimidate and punish “conservative” non-profits groups. But why should this surprise us? The IRS has been the chief instrument of coercion against America’s churches for over a half-century.  Where is the outrage among America’s Christians for the way their pastors have been intimidated and bribed into silence by this monstrous agency?  If America’s churches had any guts, they would stand up now and demand that the IRS, along with its infernal 501c3 code, be forever abolished.

Jesus said that a man cannot serve two masters – neither can a church.