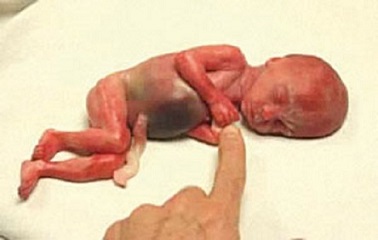 The root of the despotism of this age is clearly the corruption and abuse of language.

Those left-wing mind-molders waving to the peasants from their ivory towers insist that language is man-made, invented for personal and subjective use. Language, we are told, much like the Constitution must “evolve” and “adapt” to the changing times. Don’t drink the cool-aid – the misuse of speech today becomes the orthodoxy of tomorrow.

It is commonplace among the left to make a false distinction between the euphemism ‘pro-choice’ and its obvious antecedent ‘pro-abortion.’ But then, the left’s speech codes are designed to protect the ‘hyper-sensibilities of a debilitated and soft intelligentsia’ that prohibit plain and honest speech, especially on matters of human sexuality.  Taking the life of an unborn child they insist is nothing more than eliminating a parasitic growth that is ruining the life of its host.

Yet, when sperm fertilizes an egg, conception produces a human being with his or her own unique DNA sequence, not some parasitic growth.  This newly created life is a human being endowed by the Creator with an inalienable right to life and this life begins at conception, not at birth.

Pro-choice is but an euphemism, a corrupt and dishonest means to suggest that a mother has a right to murder her unborn child. There is nothing healthy about an abortion which kills one patient and emotionally, physically and spiritually scars the other for life.

If a fertilized egg is a human, which clearly it is, and that human is innocent, which surely it is, then to terminate the life of that child in the womb is the murder of an innocent human being. In the realm of natural law, which flows out of the eternal and divine law, it is a most unnatural act for a mother to participate in the murder of her own child.

And murder is clearly what the act of abortion is.  You can’t obscure it just by calling it an abortion or women’s rights, or pro-choice, or reproductive rights, or any other euphemism used to confuse the public.

In even more disturbing terms, image for a moment that pro-choice was meant to denote a man’s choice to choose whether or not he was going to rape a woman. Would it be easy to say that while you don’t support rape and would never rape anyone, you do support his right to rape – after all it is his body and he can do with it what he chooses!

All humans have the choice to lie, murder, or steal, but we are morally confused if we say something like “I support the right of the liar to lie to whom he will, or the thief to steal what he wants, or the murderer to kill whomever he pleases.” A decent human would never condone such behaviors or say that he tolerates anyone’s right to choose to commit a crime, not just because they are objectively wrong, but because it damages the fabric of society.

Abortion is a moral crime worse than those mentioned above. What kind of person would encourage such an evil on women and children? Clearly it is first a moral derangement. Obama once said he would encourage his own daughter to procure an abortion if she were to become pregnant. I can hardly imagine a more public or devastating disavowal of manly virtue than that.

Our moral duty to protect innocent life is the bedrock of civilization and the founding principle of this great nation. To first legalize and justify, and now to praise the murder of innocents and to denigrate calls to protect innocent unborn babies is the beginning of the end.

“Many things are permissible to men not perfect in virtue, which would be intolerable in a virtuous man.” St. Thomas Aquinas

Source: The Pro-Choice Delusion by Steven Jonathan Rummelsburg, which can be read in full at this link.

← If You Cannot See That the Democrats are Destroying America – You Need New Glasses
Is Legalized Murder of the Elderly and the Mentally Ill Coming Soon to the United States? →