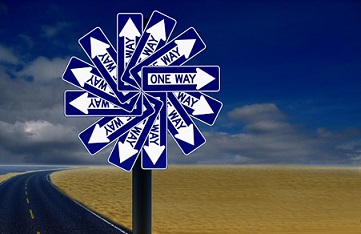 “If you believe what you like in the Gospel, and reject what you don’t like, it is not the Gospel you believe, but yourself.” Augustine of Hippo

Anyone who “thinks” they are a Christian, or “hopes” they are, probably isn’t a Christian. Christianity itself rests upon a plan of salvation, so easy that even a child can understand it.

Far too many Christians try to straddle the fence in today’s world. They get caught between clear biblical teaching and what culture pressures them to believe and so they attempt to strike some sort of compromise. Isn’t it time for true Christians to challenge those who are straddling the fence and ask them the very question Elijah once asked Israel as they strayed from God – how long will you hesitate between two opinions?

In his 2011 book, Futurecast, George Barna writes that America is filled with people who are do-it-yourselfers when it comes to religion – either making up God as they go along or dropping traditional beliefs and practices. In an interview with USA Today, He is quoted as saying that “People say, ‘I believe in God. I believe the Bible is a good book. And then I believe whatever I want.”   This buffet-style religion isn’t confined to just Christianity. USA Today quotes Nadine Epstein of the Jewish magazine Moment as saying, that most Jewish people when asked if there can be Judaism without God say yes! “You pick and choose the part of the religion that makes sense to you.”

Sorry, but all roads do not lead to God. You do not get to pick and choose what you believe from the Word. To reject some of God’s authority is to reject all of it. There is no room for fence-sitting when it comes to the Bible’s authority.   John 3:16-18, “For God so loved the world that he gave his one and only Son, that whoever believes in him shall not perish but have everlasting life…” How simple can it get?

When Oprah Winfrey was asked why she abandoned Christianity, she said it was when “she took God out of the box.” Oprah did not take God out of the box – she removed herself from the box of logic and clear thinking because she did not like the idea of being boxed-in by certain doctrines. While she and her ilk feel it is narrow-minded to say that Jesus is the only way to God, it is really not a question of being narrow-minded. It is a question of truth. Truth has dimensions.   When you take truth out of the box, all you are left with is deception.  There must be boundaries between right and wrong, good and evil, truth and lies. Oprah took God out of the box and now, for her, all roads lead to God.

An exclusive Jesus isn’t popular in an inclusive world. Unlike many people today, Jesus did not teach that all religions in the world are simply different paths up the same mountain of truth that leads to God. Jesus could not have been clearer: he offers the only way to heaven in John 14:6 when he said “I am the way, the truth and the life: no man cometh unto the Father, but by me.

If the Universalists are correct in saying that everyone is going to be in heaven regardless of what they believe, or the Pluralists are correct that all religions lead to the same god, then the horrific death of Jesus Christ was completely unnecessary. The only reason Christ submitted himself to the cross is because his death provided the only way for reconciliation with God.

Don’t be fooled. This New Age doctrine, aka “Christ Consciousness,” which has gained popularity in recent years, does not refer to worshiping Christ, it refers to being godlike and the idea that people can access God from within themselves and do not need the teachings of the Bible. It is nothing more than rebranded Eastern mysticism, known by various names throughout history such as Jainism, Buddhism, Hinduism, etc.  that use Bible verses and Christian terms, to entrap those not grounded in the Word.

“Jesus, unlike the religious action figures sold at Wal-Mart, is not infinitely bendable, able to assume whatever postmodern pose we give him.” Stan Guthrie, All That Jesus Asks

Source: You Can’t Pick and Choose What Bible Verses You Accept, Focus Press; Days of Praise, The Institute for Creation Research; Do It Yourself Religion by Chuck Colson;