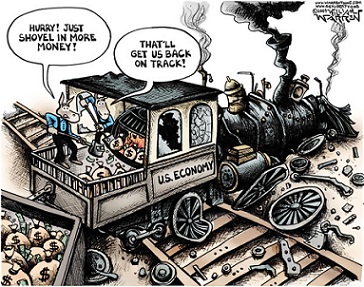 “Throughout history, it has been the inaction of those who could have acted; the indifference of those who should have known better; the silence of the voice of justice when it mattered most, that has made it possible for evil to triumph.”  Haile Selassie

Collapse is gradual, as is oppression.  Gradualism and stealth are the key components to a successful take-over.  Many see the coming collapse but refuse to see the cause.  By refusing to acknowledge the cause – we  sanction our own enslavement.

Fiat money creation is a monopoly of the government/banker alliance. As the system collapses, more and more fiat is created, which transfers more and more wealth to the government and the bankers/elite. They will continue in this fashion until there is a final collapse.

No country today backs its paper currency with gold or silver.  Money is backed by nothing other than the “full faith and credit” of whatever government is printing that money.  The “full faith and credit” comes, in part, from the ability of the government to tax its citizens and raise money, to shore up the value of the currency.  That is fiat money!

You can thank Fabian socialist John Maynard Keynes, the gay eugenicist and economist, for the government mentality that has affected most politicians.  Central economic planning doesn’t work, has never worked and will never work but it is the reason that our economy is bad and getting worse.

No amount of government spending, bailouts, fiat money printing or widening of the  deficit will revive the economy.   Thanks to Keynesian policies our national debt is so high that people literally can’t count the zeros so most throw up their hands in exasperation and give up trying.

The Federal Reserve is not financing the deficit – it is adding to the deficit. They are stimulating the banks, not the economy.   The Fed is creating fiat money through the printing press in order to transfer wealth from the people to the ruling elite.

The only reason our Treasury markets haven’t gone crazy is because the Fed has them on life support with no plans to pull the plug.   By keeping rates artificially low, the Fed is forcing money from bonds and cash into stocks which is why the markets have rallied but, every good thing has an end.

Spending money we don’t have perpetuates the illusion of wealth by fueling borrowing.  Borrowing, particularly at the government level, in turn strips capital from private markets and further bloats the public sector.   Borrowing and spending  even more money would be like giving an addict more drugs on the assumption that it will help him kick the habit later.

The dollar has only survived to date  because there is no alternative currency on the planet.  But that is all changing as China begins the push for financial control over the world’s markets.

America has been neutered into conformity.

← Executive Orders Are Not Law
Why Is Freedom Always the Problem? →