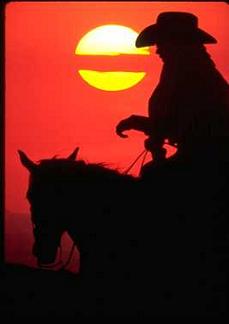 There are two Americas.  And yes, it is possible to live in one and not even know the other exists thanks to the plethora of niche media.

Since the middle of the last century, from both  domestic and international perspectives, there always was a consensus on the  quintessential American character –  something I like to call the cowboy spirit.

The cowboy spirit is based on our founding principles, our history, our religious traditions and what just felt right.   It is highly individualistic, fiercely anti-authority, suspicious of government,  philanthropic, religious, disposed to civic volunteerism, self-reliant,  spirited, unafraid, and inherently good. They are the type of person who believed  in the words of John Wayne: “If everything isn’t black and white, I say ‘Why the  hell not?’

Whether begrudgingly or otherwise, even liberals accepted this as the description  of the idealized American; that this was what they had to work around.

The Cowboy spirit was only reinforced by a Democrat president who implored Americans to “Ask not what your country can do for you but what you can do for your country.”   The Cold War only served to further reinforce these virtuous character traits and entrenched a penetrating hatred and fear of communism.  Through it all, a popular, universal and traditional culture emerged – a culture that was cohesive, ideological and most importantly – a culture of values and principles.  It was within this culture that Ronald Reagan swept forty-nine states in 1984.

Internationally, the stereotype of the American was cast.  Of course, they  caricatured it and exaggerated it but, their assessment was largely right.  The  American was exceptional in his/her rugged and determined individualism, God-fearing nature, dislike of government, and the supreme confidence he or she  exuded even when on foreign soil. This American was much more prepared to stand  up for values, and was by far the most patriotic.

These were the Americans that ate at Chic-Fil-A, watched Fox News, listened to Rush, disliked government presence in their day-to-day life, went to church, watched football, believed in traditional values and family, loved entrepreneurs, stood for the national anthem, (at times teary eyed), who generously gave to help not only their neighbors but people all over the world during times of trouble.  These were the Americans that believed that goodness would prevail over evil, even if that meant unleashing industrial size strength American whoop-ass.  They embodied the cultural consensus that once existed; they embodied the idealized American character.

Of course there are those that see America, the world and the role of government very differently.  It is through this prism that we can understand that their political choices are similar to Europe’s.  They look down their nose at those of us who value tradition.  It has become the ultimate culture war, a war they not only expect to win but a world into which they demand acceptance.  Dream on!

The traditional America that I know and love is as  passionate as ever about preserving or returning to what they have always known as  the identity of America. They will never change. They will never embrace the  European approach to government,  never turn their nose up to capitalism, never surrender their  firearms, never cease to see freedom as their number one value, nor will they ever accept collectivism (Socialism)  over individuality.  They’re not going anywhere and their traditional American character won’t let them just give up.

So, where do we go from here?

Division is not new  to America but with these two virtual “countries” with their own media, culture  and life so unpalatable to each other, one wonders what is next.   Another civil war? Secession?  Surrender?  Or will we finally open our eyes to the destructive nature of the left?

Only time will tell, and bold I might be, I won’t predict the next step.  Frankly, I don’t want to.  I am just devastated that my beloved America has been torn in two by those  with the audacity to hijack the American character.