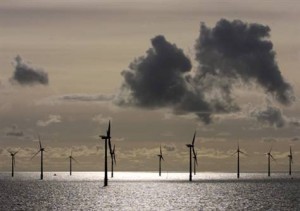 With offshore drilling on hold as a result of the oil spill, Governor McDonnell is backing another federal effort to promote energy production. McDonnell and governors in nine other states have joined an effort organized by U.S. Interior Secretary, Ken Salazar to promote, coordinate, and expedite development of offshore wind facilities along the Outer Continental Shelf. Virginia will also be home to a regional renewable energy office, although a site has not yet been selected. McDonnell feels that “this is a tremendous opportunity for us to have – when you get the infrastructure paid – a no cost source of energy. . .I’m 100% behind quickly exploring the possibility of getting a wind farm off the coast of Virginia Beach.” He later withdrew his support for the Governor’s Wind Energy Coalition saying he supports “voluntary – not mandatory renewable energy standards.”

In 2007, Virginia’s first commercial wind farm was approved for installation with as many as 20 wind turbines, each 400 foot tall, to be erected atop two Alleghany Mountains in Highland County, near the West Virginia Border. The State Corporation Commission immediately imposed strict environment safeguards on the site. Construction of the $80 million project started in 2009, and in May of this year, the County Board of Supervisors and the developer were threatened with a lawsuit by a group of concerned citizens and conservationists, if construction continued.

June 2010, the Roanoke Valley Cool Cities Coalition board of directors unanimously endorsed a plan to put 15 to 18 wind turbines, standing some 440 feet high, on the ridgeline on Poor Mountain not far from a Bent Mountain community.

Dominion Resources and BP Wind Energy have also proposed building wind farms in Tazewell and Wise Counties. Tazewell supervisors have substantially put an end to the proposed turbines by a vote of 3-2 to limit structures taller than 40 foot. Wise County, however, approved the farm plans for their area.

While I am not against progress, I am  against progress at any cost. When I think of wind turbines I picture Holland and wind mills. Like most Americans, I don’t particularly like cell phone towers but I know they are a necessary evil. And I don’t think I could survive without wireless. But wind farms! After hours of research, I would like to share a few of the tidbits I found.

The cost to develop and build a wind energy facility is approximately $1.3 million to $1.7 million per megawatt, compared to gas fired energy generation of $800,000 per mega watt. On average, due to wide and unpredictable fluctuations of wind, turbines will only produce on average about 30% of its nameplate power. It takes over one thousand times the amount of land for wind power to produce roughly the equivalent amount of
energy as a nuclear plant. It is not reliable or predictable and what’s worse, wind can’t be counted on to provide power on demand. Most of the windiest sites and available lands are a long way from where electricity is needed, resulting in the need for thousands of miles of huge unsightly transmission towers and cable, at an enormous expense to the consumer. A study done in 2007 by the U.S. National Academy of Science concluded that under the most optimistic conditions, co2 savings by 2020 will amount to only 1.8%. And, according to The Heritage Foundation, the average family would pay $300.00 a month for wind powered electricity as opposed to $189.00 from coal.

Sorry, Governor McDonnell but I don’t get the “no cost” source of energy.

Europe has been in the wind power business for quite a few years. In 1998, Norway commissioned a study of wind power in Denmark and
concluded that it had serious environmental effects, insufficient production and higher production costs. Denmark has over 6000 turbines that produce
electricity equal to 19% of what the country actually used. Yet, no conventional power plant was ever shut down. Because of the intermittency and
variability of the wind, conventional power plants must run at full capacity to meet the actual demand for electricity. In 2004, Denmark’s glut of wind towers provided only 3.3% of their electricity. The country is just dependent enough on wind power that when the wind is not blowing right they must import electricity and as a result they have the highest electrical consumer costs in Europe.

The first detailed study of Britain’s onshore wind farms suggests some treasured landscape may have been blighted for only small gains in green energy. Britain has 245 onshore wind farms. Although wind power is expensive, the industry has boomed because of the renewable obligation
subsidy program, under which consumers pay roughly double the normal price for energy from wind. “Too many developments are underperforming because developers grossly exaggerate the potential. the subsidies make it viable for developers to put turbines on sites they would not touch if the money was not available.”

Cost is not the only factor – lets consider safety. Germany leads the world in installed wind energy with 18,865 turbines supplying ONLY 5.7% of the nation’s electricity. But, even among insurers in Germany, wind power is now considered a risky sector. They have reported accidents such
as fragments of a broken rotor blade striking a road shortly before rush hour traffic, a 230 foot tall wind turbine which folded in half next to a highway;
two turbines on fire and firemen unable to put it out because their ladders weren’t tall enough to reach the burning casings, rotor blades ripping off a 328 foot turbine with fragments landing in a field, etc.

In a health study at Northern Maine Medical Center, the data which Dr. Nissenbaum characterized as alarming, suggests residents living within 3500 feet of wind turbines are experiencing serious health problems related to shadow flicker and noise emissions. The World Health Organization has identified children and the elderly as being particularly susceptible. Dr. Nina Pierpont, a NY Pediatrician says she is convinced that vibration and noise emitted by wind turbines can produce a range of symptoms she calls “Wind Turbine syndrome” (WTS). She said that there are 12 different health problems associated with WTS ranging from tachycardia (abnormal heart beat) to panic attacks.

Turbulence produced by turbine rotors can have a strong impact on local ground temperatures and moisture content. Turbulence creates stronger mixing of
heat and moisture which causes the land surface to become warmer and drier. Federal officials have warned of a potential threat to endangered birds from
crashing into turbines or the transmission lines or from loss of habitat. Wind farms as far away as 25-30 miles are interfering with Doppler radar.
Turbines can short out, be struck by lightening, or overheat causing wild fires.

Offshore wind farms are common in Europe. In the U.S. they have been mainly confined to land but there are 3 installations planned off the coast of New
Jersey, Rhode Island, and Delaware. The Meteorological Institute in Oslo reports that extracting energy from wind changes regional air currents which in
turn affect how the nearby ocean circulates, bringing nutrient rich water up from the depths. Overtime you could see a lot more plankton blooming which is
famous for causing toxic red tides and sucking oxygen out of the water. Studies at the Oslo Institute were done at 98 foot depth. Deeper farms have been
proposed in Europe but they conclude that maintenance costs skyrocket the further away from shore you go.

The effect on co2 is negligible. They are expensive to build and maintain. Our electric bills will double and it’s a given our taxes will increase. They cause health problems, can be dangerous to wildlife, are a definite blight on the landscape, and an environmental hazard to our forests and oceans. They only have a life of twenty plus years. What happens when it is no longer economically viable to repair or maintain them? Has anyone actually thought about the long term effects these massive turbines will have on our environment? Wouldn’t it be better to invest all this money in clean coal technology? How about just investing the money in an industry that will actually produce jobs.

actually it is not that hard to setup wind farms, the only problem is that it requires
lots of capital investment.:’,

Not being hard doesn’t change the environmental and health problems associated with
wind farms. While we don’t know enough about the long term effects, we do know
from other countries that they don’t work so why waste the money?

wind farms are eco friendly and can generate massive amounts of electricity*.;

Wind energy is not a long term answer nor is solar energy. As Rretta pointed out the
cost per megawatt is prohibitive and will never be a base-line source of power
because the wind doesn’t always blow nor does the sun always shine.

wind farms in germany are great! i hope that we could install those in every
country`:.

You must like to spend your money needlessly. Germany is having as many problems as
the rest of Europe in justifying the cost of wind power. Germany’s own Energy
Agency said that it would be more cost effect to insulate homes. Wind power can
only provide up to 8% of Germany’s power needs at very high costs which is
passed on to its residential customers and still requires that they run
conventional power plants. So what makes them so great?

both wind power and solar power are great sources of electricity and they are
non-polluting too ~:~

Adam, No one is disputing the fact that it is a good (I would not classify it as
great) or that it is non-polluting. It will never be a BASE-LINE source of
power, that it unless your happy to live in the dark for days because the sky
is cloud covered, or the wind isn’t blowing. Not to mention the food spoiling,
etc. No one is saying that it WILL NOT WORK. it is just not a depenable, cost
effective source.

← THE PROGRESSIVE MOVEMENT: A Rose By Any Other Name
Snooping For Snitches (or) Don’t Sell A Hot Talame →