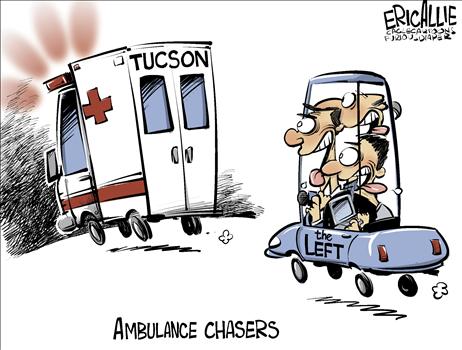 On Saturday, January 8, 2011, a deranged assassin opened fire at a political event, killing six innocent people.  Although little is known of Jared Loughner’s motives, the “never let a crises go to waste” far leftwing liberals are already gearing up to destroy the First Amendment.

The rhetoric started with the Pima County Sheriff who blamed the “vitriol that comes out of ‘certain’ mouths about tearing down the government. . .”

Obama added his two cents when he said that the shooting was partly caused by political rhetoric.

Jane Fonda immediately blamed Sarah Palin, the Tea Party and Glen Beck.  This coming from a woman who will forever be held responsible for the death of  U.S. servicemen in Vietnam.

A Democratic official told Politico on Sunday that “they need to deftly pin this [the shooting] on the tea partiers. . .just like the Clinton White House deftly pinned the Oklahoma City bombing on the militia and anti-government people.

The New York Times published a headline of “Bloodshed Puts New Focus on Vitriol in Politics,” insinuating that conservative criticism of Obama and his policies may have been the motive.  They went so far as to blame criticism of Obamacare, amnesty and Gifford’s religion as possible motives.

CNN spent most of their coverage trying to tie the shooting to the tea party and Sarah Palin.  This is the same network that ‘urged’ caution in laying blame when a Muslim murdered soldiers at Fort Hood.

As a Christian, a tea party patriot, and a conservative, it sounds to me like the far left loonies and the drive-by media are spouting their own hate speech!

Representative Robert Brady, D-PA,  said “the rhetoric is just ramped up so negatively, so high, that we have got to shut this down.” He plans to introduce legislation that would make it a federal crime to use language or symbols that could be perceived as threatening or inciting violence against a federal official or member of Congress.  He told CNN that he wants lawmakers to have the same protections currently provided to the presendent.

The far left threatened President Bush for 8 years!    During those eight years, I never heard a Democrat call for a law banning ‘rhetoric’, or  what we conservatives refer to as FREE SPEECH.

Jared Loughner, as reported by the Arizona press,  has been described by his classmates as a radical, and a liberal who was obsessed with 2012.  Loughner was removed from Pima Community College for causing disruptions in the classroom and the library which led to his posting  a  YouTube video declaring the college illegal under the U.S. Constitution.

His favorite reading material, reported by ABC news was “The Communist Manifesto” and “Mein Kampf”, and “One Flew Over the Cockoo’s Nest”.

We may never know what possessed Mr. Loughner to go on his murderous rampage but we do know that he was not connected to Sara Palin or the tea party movement.   We also know that the far left and the drive -by media will attempt to use this to silence opposition.

Our representatives need to know that any new legislation that further erodes our First or Second Amendment rights is out of the question.  There are already laws in effect to prosecute Mr. Loughner and other crazies like him.  No new or existing law would have stopped him from his murderous rampage.

While we mourn the senseless loss of lives and pray for the injured, cooler heads must prevail.  There is only one person responsible and that is  Jared Loughner.