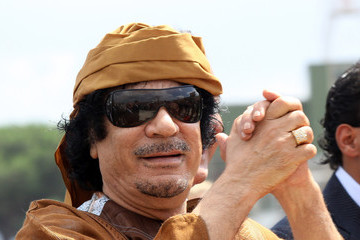 Libyan leader Muammar Gaddafi is now urging Palestinian refugees to capitalize on the wave of popular revolts in the Middle East by massing peacefully on the borders of Israel until it gives in to their demands.  “Fleets of boats should take Palestinians. . .and wait by the Palestinian shores until the problem is resolved.  This is a time of popular revolutions.  All Arab states which have relations with Israel are cowardly regimes.”  Unfortunately the demands from the Palestinians involve  death so we should not expect Israel to give in.  Palestinians have long demanded that refugees who “fled or were forced to leave” in the war of Israel’s creation in 1948 should be allowed to return and Israel demands that any resettlement of the refugees occur outside of their borders.  Israel must not surrender to terrorism.  It is not too late to tell the truth about Palestine.

Zionism has become a dirty word throughout the world demonized by the liberal drive-by media who view Israel’s treatment of Palestinians tantamount to genocide and claim Israel is a racist state akin to apartheid in South Africa.

The United Nations set up an agency whose sole function was to support a group of refugees called Palestinians.  The U.N. General Assembly and the Human Rights Council further demonize Israel, making it a pariah in the world community.  The Arab world issues unceasing propaganda against Israel and Zionism, depicting Jews as apes, pigs, and subhuman monsters.   Palestinian children are inculcated with seething, blind, unrelenting, and obsessive hatred of Jews.   Middle Eastern Studies have been set up on American  campuses  as anti-Israel, anti-American think tanks where scholarship is tainted with ideology and focused on the Palestinian cause.  The Muslim Students Association  hold “Israel Apartheid Week” and “Holocaust in the Holy Land” festivals at which propaganda, Jew-hatred, apologies for terrorism, and further demonizing of Israel takes place.  Israel, the only Middle East democracy with a thriving economy is constantly being described as the “greatest threat to world peace”, the cause of all Muslim anger, the root of the Palestinians’ suffering and economic plight.   If that is not enough to make the world hate Israel, you rewrite history!

Who are the Palestinians and what right do they have to Israel’s land?

The Canaanites, the first inhabitants in the land, were descendants of Canaan, the fourth son of Ham,  {Gen  10:6}, the progenitor of the Phoenicians. {I Chron  I:8}    They were traders, seafarers and builders, speaking a branch of the Semitic language, so closely allied to Hebrew that Phoenician and Hebrew, through different dialects, could be regarded as the same language.  When the Hebrew peoples settled in the land they shared it with the Canaanites and only after the exodus from Egypt did they conquer the land.   It was the Greeks that gave the name Phoenician to the land the Canaanites occupied.   In 539 BC the Canaanites, aka Phoenicians,  were conquered by the Persians and became part of the Persian Empire.  In 332 BC their capitals Sidon and Tyre were captured by Alexander the Great and became part of his empire.  The descendants of the Canaanites now reside in current day Lebanon.

The Philistines were a confederation of non-Semitic people from Crete, the Aegean Islands and Asia Minor that settled in the land before the time of Abraham.  They are mentioned as a pastoral tribe near Gerar in Gen  21:32, 34, and in  Gen 26:1, 8, later migrating into the plains of Philistia, once occupied by the Canaanites, which formed a portion of the promised land assigned to the tribe of Judah.  The Philistines invaded Egypt but were defeated by Ramose II in 12th century BC and were later defeated by King David.  Those living in the Gaza were taken by Sargon II of Assyria and then
disappeared from history.

It was in the 2nd century AD that Roman Emperor Hadrian decided to wipe out the name of Judah and Israel and replaced it with the name Palaestina in an attempt to efface any trace of Jewish history.  The name Palaestina never existed before Hadrian. You will not find it mentioned in the Bible, nor in
any history or writing of the Assyrians, Persians, Macedonians or Greek, or, for that matter, in the Qur’an.   The name Falastin that the Arabs use for Palestine is not even an Arabic word but was adopted and adapted from the Latin Palaestina.

Walid Shoebat, a Palestinian immigrant to the U.S. and former PLO militant is a Christian who converted from the Muslim faith.  He was born in Bethlehem, the grandson of Mulhtar of Beit Sahour and was heavily involved in fighting Israel.   “Why is it that on June 4, 1967, I was a Jordanian
and overnight I became a Palestinian?  We did not particularly mind Jordanian rulers.  The teaching of the destruction of Israel was a definite part of the curriculum but we considered ourselves Jordanian until the Jews returned to Jerusalem.  Then all of a sudden we were Palestinians – they removed the star from the Jordanian flag and all at once we had a Palestinian flag.  Everyone I knew could trace their heritage back to the original country their great grandparents came from.  Everyone knew their
origin was not from the Canaanites but this is the kind of stuff our education in the Middle East included.   The fact is that today’s Palestinians are immigrants from the surrounding nations.  I grew up well knowing the history and origins of today’s Palestinians as being from Yemen, Saudi Arabia, Morocco, Christians from Greece, Muslims Sherkas from Russia, Muslims from Bosnia and the Jordanians next door. . .”

Zuhair Muhsin, Military Commander of the PLO and PLO Executive Council is quoted as saying “There are no differences between Jordanians, Palestinians, Syrians and Lebanese.  We are all part of one nation.  It is only for political reasons that we carefully underline our Palestinian identity. . .yes, the existence of a separate Palestinian identity serves only tactical purposes.  The founding of a Palestinian state is a new tool in the continuing battle against Israel.”

Abdul-Hadi, the Syrian Arab leader to the British Peel Commission in 1937 said “There is no such country as Palestine.  Palestine is a term the Zionists invented.  There is no Palestine in the Bible.  Our country was for centuries part of Syria.  Palestine is alien to us.  It is the
Zionist who introduced it.”

Joseph Farah, an Arab writer and journalist in “Myths of the Middle East” wrote “there has never been a land known as Palestine governed by Palestinians.  Palestinians are Arabs, indistinguishable from Jordanians, Syrians, Iraqis, etc.  Keep in mind that Arabs control 99.9% of the Middle East lands.  Israel represents 1/10th of 1% of the landmass.  But that is too much for the Arabs.     They want it  all. . .”

As far as the Palestinian people occupying the land prior to Israel becoming a nation –   the Jews have always maintained a presence in the area and throughout the Arab countries.  They have continually lived in Palestine with the Arabs.

The Muslims conquered Jerusalem in 638 AD and gave their protection to the Jews and Christians in the area.  The Seljuk Turks conquered Jerusalem in 1071 and ruled for 30 years before being replaced by Fatimid rulers of Egypt in 1098. In 1099 the Crusaders invaded the area killing many Jewish and Muslim defenders and then later forbade the Jews to live in Jerusalem.  The Jews settled in Egypt, Iran,  Iraq, etc.  In 1187 Muslim ruler Saladin conquered Jerusalem.  In the mid 1200’s the Mamelukes, originally soldier slaves of Arabs based in Egypt, established their empire in Palestine.  In the 1300’s Jews from Spain and other Mediterranean lands moved back to Jerusalem.  In 1517 the Ottoman Empire took over and the Turkish Sultan invited Jews fleeing the Spanish Catholic inquisition to settle.   In 1789 Napoleon entered the scene and
both Arabs and Jews fled to safer lands during the wars.  The Turkish Empire opened the land to foreigners to restore order and allowed the beginning
of Jewish settlements under various Zionist and proto-Zionist movements.  Both the Arab and Jewish population grew.  By the 1800’s about 24,000
Jews were living in Palestine.  The Ottoman Empire then imposed restrictions on Jewish immigration and land purchases and invited Muslims from
other parts of the Ottoman Empire to settle the land.  And, by 1897 the Zionist movement became a formal organization and established communities
in Palestine, later establishing the city of Tel Aviv north of Jaffa.  Both Arabs and Jews inhabited the land.  By 1914 the Jewish population of Palestine was around 100,000.

The only peoples not mentioned in this brief history of the Holy Land are Palestinians because there is no such people.

Thomas Shaw, an archaeologist in the mid 1700’s wrote “the land in Palestine is lacking in people to till its fertile soil.” James Finn, British Consul in 1857 wrote “the country is in a considerable degree of empty of inhabitants and therefore its greatest need is of a body of population.” The British Royal Commission wrote in 1913 that “the area was under populated and remained and economically stagnant until the arrival of the first Zionist pioneers in the 1880’s who came to rebuild the Jewish land. . .”   Mark Twain wrote in 1867 of his visit
to the Holy Land that “when invited back to settle there was not a solitary village throughout the valley of Jezreel, Galilea, not for 30 miles in either direction. Nazareth is forlorn,  Jericho lies in ruins, Bethlehem and Bethany untenanted by any living creature.  A
desolate country. . .we never saw a human bring on the whole route. . .” So where were all the Palestinian people?

As for the Islamic claim to the Temple Mount – the grand mufti  Haj Amin al-Husseini decided in 1930 to turn the temple mount into a Islamic holy
site.    There were no mosques in Jerusalem in 632 AD at the time of the death of Muhammad so there is no way the Qur’an could make mention
of it.  During this time, Jerusalem was occupied by Christians within the Byzantine Empire and a church stood on the temple mount – the Church of St Mary of Justinian.  Abd el-Wahd who ruled 705-715 reconstructed the church and converted it into a mosque and renamed it El-Aqsa.

In the Arab world you can play fast and loose with history in an attempt to create a historical narrative conforming to your own political agenda, erasing any link between Palestine and the Jews.  Though Jerusalem is not mentioned once in the Koran and over 669 times in the Jewish Bible they can claim it as a Muslim holy site.  According to Yasser Arafat, at Camp David in 2000, the Temple Mount was never a Jewish site, that Jews now occupy Muslim lands, and that the archeological and historical evidence that confirms an uninterrupted 3000 year presence by Jews in the Holy Land is merely a constructed lie.  When Arafat signed the Declaration of Principles on the White House lawn in 1993, he explained his actions on Jordanian TV.  “Since we cannot defeat Israel in war, we do this in stages.  We take any and every territory that we can of Palestine, and establish a sovereignty there, and we use it as a springboard to take more. When the time comes, we can get the Arab nations to
join us for the final blow against Israel.”

Read “How To Get The World To Hate Israel” and “Myths, Hypotheses & Facts”.  Further reading: “The Myth of the Palestinian People” and “The Forgotten Jewish Refugees from Arab States”.

← THE ENEMY WITHIN
DIVORCED FROM REALITY →