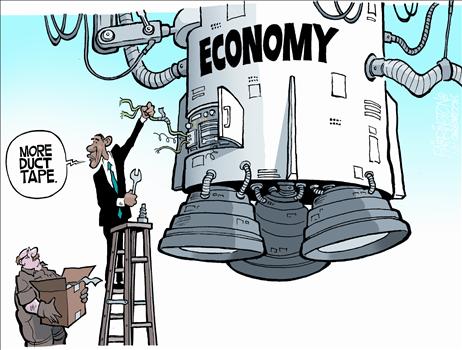 Don’t believe what the Democrats are saying about the debt ceiling.   Not raising the current federal debt ceiling will not immediately shut down the government, nor will it automatically lead to a federal default.   It will only stop the government from borrowing more than the current limit and force it to rely on other means to finance their activities.  Think of it as the government maxed out on their credit card.

Geithner has already sent a letter to Speaker Boehner setting out the government’s position.  He said the government could delay the “day of reckoning” up to 8 weeks through measures such as suspending reinvestment of a retirement fund for federal employees but after that the government would begin to default.  He also warned that it would produce dire consequences like damaging the dollar’s current role as a reserve currency in the global economy, raising interest rates and stunt investment.    Short of interest rates, I think that ship has sailed.  China has been calling for a new global reserve currency for months and Obama and his regulation police have already killed investing.

What Geithner didn’t say in his letter is that the federal government has other ways to not default like delaying payments, accessing savings, etc. They also have other tactics such as leasing assets and slowing down payments to government contractors.  Social Security, Medicare and the military would still be funded but agencies like the EPA, the FCC, the Department of Education, etc. would shut down.  Imagine a few weeks without more job killing regulations!

Some people like to think that the President just didn’t get the message in November.  He got the message – he just doesn’t care! Socialist are stubborn because reality doesn’t suit their agenda.   Instead of falling prey to the “remaking” of Obama’s image start paying attention to his actions.

Socialists are still pushing the message that  more spending will  lead to job creation.  So far, the only jobs created have been government jobs and the balance of the so called “stimulus funding”  went into the pockets of Obama’s friends and backers.  Isn’t the definition of stupid doing the same thing over and over again and expecting different   results?

Obama said “we will not be adding more to the national debt. . .we’re not going to be running up the credit card any more. . .”  Then he comes out with a budget proposal that will increase our deficit by $13 trillion.  If his budget is implemented it will double our national debt over the next ten years.

He wants to raise the capital gains tax from 15% to 20%; raise the Death Tax from 35% to 45% while cutting the amount exempt to $3.5 million; increase the top tax rate from 35% to 39.6%; limit business deductions; and, cap deductions for mortgage interest, charitable donations, personal property tax,  un-reimbursed employee business expenses, and state income tax at the 28% tax bracket.  In addition he has proposed new energy taxes, new life insurance company taxes, new bank taxes and  added new muscle to the IRS by requiring more information reporting and IRS sharing of your personal information.  The total amounts to somewhere around $2.6 trillion in tax hikes.

Debt is a threat to individual liberty, prosperity and our national security.  Since this Administration took office total entitlement spending has
grown 4%, discretionary spending increased by 16% and the national debt has exploded 43%.  During this same period, the economy lost 3.3 million jobs.

A labor department report showed that more Americans than projected filed first time claims for unemployment compensation during the week ending  February 12.  Energy costs increased 2.1% in January and rose 7.3% for the prior 12 months.  Food prices rose .5% in January, the biggest gain since September 2008 and were up 1.8% for the twelve month period.   Yet, our leaders continue to push for higher taxes and additional spending that will only serve to increase unemployment.

Obama may well claim a place in history as the President that bankrupted America.