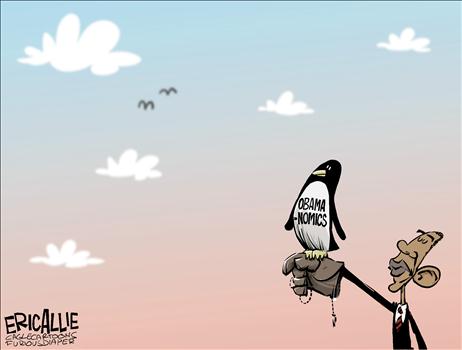 Obama, in campaign mode,  remarked that “Today, the single most serious economic problem we face is getting people back  to work.  We stabilized the economy, we prevented a financial meltdown and an economy that was shrinking is now growing.. .But, I’m still not satisfied.  I will not be satisfied until everyone who wants a good job that offers some security has a good job that offers security.”  Translation: I have done everything possible to destroy the economy and I won’t be satisfied until everyone is unemployed.  I’m still  not sure whose economy he stabilized or whose economy is growing, I just know it isn’t ours!

As Obama tries to take control of his image, Robert Gibbs had to his two cents.   Gibbs says this election is not about fixing blame to the economic crises and then noted that people still blame Bush more than Obama for the troubled economy.  So much for not using the blame game!

It was White House chief of Staff Bill Daley, who after listening to complaints from business leaders about burdensome government regulations said “Sometimes you can’t defend the indefensible.” It may have only been a slip of the tongue but bless you Mr. Daley!  Of course Jay Carney,  White House Spokesman attempted some lame explanation for Mr. Daley’s remarks, but the damage was done.

Even with rising energy prices and complaints from the business community that Obama’s regulatory burdens verge on the ridiculous, he continues his relentless assault on domestic energy and jobs.   Under an agreement between federal regulators and environmentalists aimed at jump-starting a delayed clean air initiative, Obama signed an agreement with the radical WildEarth Guardians that will cost utilities an additional $1.5 billion and put at risk the operation of 18 coal fired electric plants in Colorado, Montana, North Dakota and Wyoming by next year.  So much for worrying about jobs!

WildEarth Guardians is your average everyday far left anti-capitalist group.  Their founder, Sam Hitt, blogged last year under “Revolutionary Rant #8” that a revolution could happen.  “First a general disillusionment with the power structure, like the distrust of capitalism and corporations that is widespread in American today.  Then a mismanaged crisis, such as the global financial meltdown that fundamentally delegitimizes the system. . .But to overcome the gravitation pull of the old capitalist pradigm, there must be a critical threshold of steadfast citizens willing to risk the new, not reform the old.”

Doesn’t it make you feel all warm and fuzzy to know that Obama continues to do business  with people who want nothing more than to destroy our way of life.

It is bad enough that prairie chickens, smelt fish and dunes sagebrush lizards have become the weapon of choice in a war on jobs by the Obama administration but the policies in effect at the Department of Interior, led by Ken Salazar, are turning farmlands into dust bowls and running oil and gas development off the land, out of the water and out of the country.  Rep. Tom McClintock, R-CA, said that “I think they have constructed the most effective job killing machine in the history of the country.”   “If Salazar’s job is to kill jobs, then he gets an A plus,” said Rep. Devin Nunes R-CA. “His department has killed more jobs in the U.S. than any other federal agency.”

California’s Central Valley struggles for water because some 200 billion gallons are diverted to the Pacific Ocean for the benefit of the Delta smelt.   This man made drought has idled more than a quarter of a million acres of farmland with thousands of farmers out of work.  The Central Valley has one of the nation’s highest unemployment rates at 20%.

Rep. Steve Pearce R-NM, chairman of the Congressional Western Caucus says “It’s an all out war on our way of life.” Earlier this year legislation to block funding for the Interior Department to use to add the dunes sagebrush lizard and the lesser prairie chicken to the Endangered Species List was introduced.  According to Pearce “The extreme view is that if you disturb the ground, the lizard might not walk across it.  They say agriculture disturbs the gound, ranching and farming disturbs the ground and you can’t drive a ranch vehicle across the dunes because the lizard might not walk through the track. They don’t want the oil rigs running day or night during breeding season because it might disrupt the breeding.  They jut don’t see nature as nature is.  It’s this sort of quasi-science not based in fact that makes people mad.  They are doing it because their agenda is to shut down as much oil and gas production as they can.  But it’s full employment for the environmentalists’ lawyers.”

Jim Adams, president and CEO of the Offshore Marine Service Administration says that “Salazar has put our employment potential in irons.  The most compelling thing to understand is why this administration is pursuing unemployment, both in the gulf and nationally.  They want everyone to drive hybrids and to make it cost competitive, they need fuel prices at $6 or $7 a gallon.  Their policies have sidelined our industry.”

Adams went on to explain that “they are displacing a world class workforce and the end result is clear: they want to see less domestic exploration, which means less production, which means fewer jobs.  And the jobs don’t stop at the gulf.  As the jobs decline in the gulf, so do steel jobs in Pennsylvania to make drill bits and the jobs building cat diesel engines in Peoria, Il.

Remember in 2008 Obama told the San Francisco Chronicle about his agenda to destroy the coal industry. “so if somebody wants to build a coal powered plant, they can – It’s just that it will bankrupt them. . .” And then he added that the industry would protest that “he was destroying the economy” but he wasn’t worried because he had the golden tongue.

I honestly don’t know which is worse –  Obama’s golden tongue (lies) or the American voters falling for his deception.

← LEON PANETTA: A Socialist With Deep Ties To The U.N.
NEW U.N. SCAM TO TAKE CONTROL OF U.S. →