The Justice Department and its agencies and bureaus have completely lost sight of the limits that the Constitution was supposed to have imposed on their power.  (video) 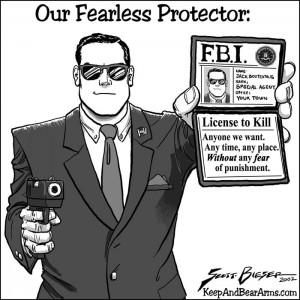 The Federal Bureau of Investigation is giving significant new powers to its roughly 14,000 agents, allowing them more leeway to search databases, go through household trash or use surveillance teams to scrutinize the lives of people who have attracted their attention.

The FBI has rewritten its own operations manual, giving its agents more power than ever to conduct low-level searches without a paper trail, and with no court decision or change in privacy laws governing the bureau’s search techniques. The 2011 update to the 2008 Domestic Investigations and OperationsGuide  changes the bureau’s own guidelines.

Here’s what FBI agents will be allowed to do under the new guidelines:

Undocumented database searches: Right now, agents can search commercial and law enforcement databases for any individual or organization they want, even without real evidence of wrongdoing, but they must officially open a so-called assessment inquiry. “Under the new rules, agents will be allowed to search such databases without making a record about their decision,” The Times reports. ACLU lawyer and former FBI agent Michael German said that would make it “harder to detect and deter inappropriate use of databases for personal purposes,” but Valerie Caproni, the FBI’s general counsel, “said it was too cumbersome to require agents to open formal inquiries before running quick checks.”

Trash searches: Similar to the relaxed restriction on lie-detector tests, agents will be able to search the trash of a potential informant as part of an assessment. “Agents have asked for that power in part because they want the ability to use information found in a subject’s trash to put pressure on that person to assist the government in the investigation of others. But Ms. Caproni said information gathered that way could also be useful for other reasons, like determining whether the subject might pose a threat to agents.”

Surveillance squads: The current guidelines stipulate that these highly trained squads can only be used on a target once during an assessment. The new rules would allow them to be used multiple times, but keep in place limits on the duration of physical surveillance. Caproni told The Times that overuse of the squads would be curbed because of tight resources at the Bureau.

Authorizing informants at religious ceremonies: In this case, the FBI tightened its restrictions: “Currently, a special agent in charge of a field office can delegate the authority to approve sending an informant to a religious service. The new manual will require such officials to handle those decisions personally.”

“The right to be let alone is the underlying principle of the Constitution’s Bill of Rights.”  Erwin N. Griswold