Once again lies flow through the Obama administration; “I didn’t know anything about it.” But for now they’re not blaming anyone yet, not even George Bush.  Guess they’re still looking for a fall guy. 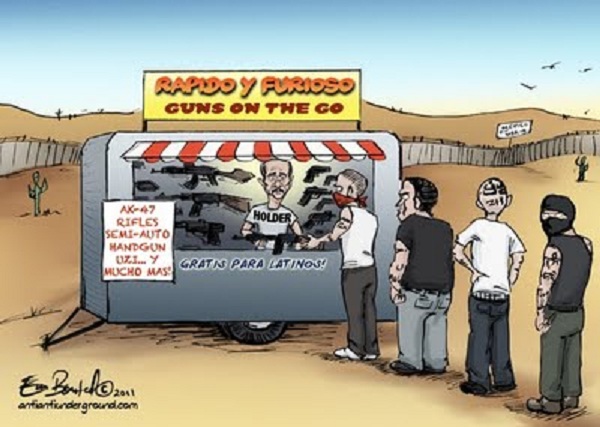 Well this time, they’re caught in their own trap, and if allowed to escape…shame on America.

When Obama or Attorney General Holder say they knew nothing about ‘gunrunner’, ‘gun walker’ or the ‘Fast and Furious’, these are obiviously blatant lies.

The money for operation ‘gunrunner’ was included in the stimulus. They knew exactly what was taking place and the risk of what could happen. Yet, they cared not. Their only concern was their agenda; to pass more gun legislation eventually burying the second amendment; depriving everyone the right to protect ourselves, our loved ones, and our homes.

Why do they want to disarm the American citizens? For complete power and control. You can’t control a country if the country is armed.

Their actions are unforgivable. Operation ‘gunrunner’ was a direct plot to accuse American citizens of arming the drug cartels with illegal firearms, when in fact, it was the government arming the drug lords.

All the blame cannot be placed on the one agency, the ATF, though I’m sure they were more than a willing participant in this usurping scheme.  It isn’t the first time the ATF played a major role in trying to entrap gun dealers and/or citizens.

Just a day after U.S. Rep. Allen West, R-Fla., called for Attorney General Eric Holder’s removal, alleging a White House connection to the “Project Gunrunner” that allowed weapons to be delivered to Mexican drug lords, confirmation has come that the program originated at the highest levels of the Obama administration.

The link is the $10 million in taxpayer dollars designated to the Bureau of Alcohol, Tobacco, Firearms and Explosives for Project Gunrunner in Obama’s 2009 American Reinvestment and Recovery Act, otherwise known as the Stimulus Bill.

Section 5, Division A, Title II, under the heading of “Office of Justice Programs,” says the money is set aside for border regions.

For an additional amount for ‘State and Local Law Enforcement Assistance,’ $40,000,000, to remain available until September 30, 2014, for competitive grants to provide assistance and equipment to local law enforcement along the Southern border and in High-Intensity Drug Trafficking Areas to combat criminal narcotics activity stemming from the Southern border, of which $10,000,000 shall be transferred to ‘Bureau of Alcohol, Tobacco, Firearms and Explosives, Salaries and Expenses’ for the ATF Project ‘Gunrunner’.

Don’t even try and convince me that Obama and Holder knew nothing about this. One would have to be brain dead to believe such a thing.

Listen to Holder as he tries to explain Gunrunner.

Obama Says He, Holder “Did Not Authorize” GunWalker Scheme

In an interview with the Spanish language network ‘Univision’ this is how Obama addressed the ‘gunrunner’ controversy.

“You were not even informed about it?” asked Univision reporter Jorge Ramos.[Does anyone truly believe Obama would own up to it?]

“Absolutely not,” Obama answered. “There may be a situation here which a serious mistake was made and if that’s the case then we’ll find out and we’ll hold somebody accountable.”  [Just Look in the mirror Obama and you found your man.]

In an exclusive interview with CBS News, the lead ATF official in Mexico at the time Darren Gil says somebody in the Justice Department did know about the case. Gil says his supervisor at ATF’s Washington D.C. headquarters told him point-blank the operation was approved even higher than ATF Director Kenneth Melson. 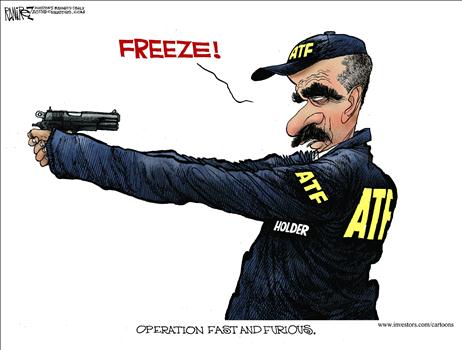 The Case For Impeaching Holder here.

Call your Congressman toll free @ 1-877-851-6437 and tell them Attorney General Holder needs to be held responsible, and to abolish the ATF.