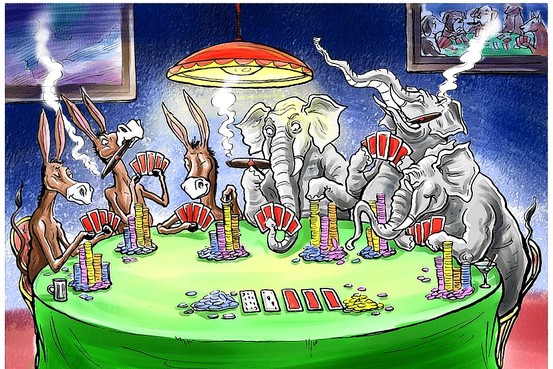 Thursday  it was rumored that Obama and Boehner had reached a deal to raise the debt ceiling and cut the national debt.  Democrats, at least the far left liberal socialist progressives, went nuts that a deal could be reached that excluded  tax increases.  According to Senator Barbara Mikulski of Maryland “Many of us were volcanic.”   Harry, cowboy poets wouldn’t exist without taxpayer funding, Reid said that his caucus would oppose the “potential agreement” because it appeared to include no clear guarantee of increased revenue.    A deal would kill Reid and Mitch McConnell’s  plan that would have allowed Obama to increase the federal debt  by $2.5 trillion over the next year unless a 2/3’s majority of Congress objected.

Specifics involving the deal are scarce but both sides did agree on $1.2 Trillion in cuts over the next 10 years; a second piece of legislation to be decided by the reconciliation budget process that would up the Medicare retirement age and change premium structure for parts B & D while eliminating certain kinds of supplemental insurances, as well as change how SS benefits would be paid in 2015.  Each side also agreed to pass tax reform down the road (never) resulting in $800 billion in new revenues (taxes).  Obama wanted an additional $400 billion more in new revenues (taxes) which Boehner would not agree to, so Friday afternoon the talks ended.  Obama did offer to drop the $400 billion in new taxes if Boehner would lessen entitlement cuts.

House Republicans  manage to pass a Cut, Cap and Balance plan that would increase the federal debt limit by $2.4 trillion in exchange for a spending cut of $111 billion next year.  They are also pushing for a balanced budget amendment to the Constitution that, if ratified by the states, would require a supermajority in Congress to increase taxes, the debt limit or spend more than 18% of GDP in a given fiscal year.   House Minority Whip, Steny Hoyer of Maryland said requiring a supermajority vote of congress would make it “virtually impossible to raise revenue [taxes].”  He also said that Republicans were using the proposal to appeal to an extreme fringe.  “When even three-quarters of Republicans said in a poll last week that they want a balanced deficit solution, it is clear that this bill is targeted at the extreme fringe in American politics, a small minority of the far right.”     Someone should tell the Dems to pull their head out of the sand.

Neither side wants a balanced budget  – a balanced budget would force politicians to cede their power to the taxpayers.  As it stands now they have an unlimited source of other people’s money to waste and they will not give that power up without a fight!

Then there is the so-called Gang of 6 made up of Senators Kent Conrad of North Dakota, Dick Durbin of Illinois, Mark Warner of Virginia, Saxby Chambliss of Georgia, Mike Crapo of Idaho, and Tom Coburn of Oklahoma.   This off-again, on-again gang outlined their plan to cut spending by $3.7 trillion over the next 10 years by overhauling the tax code and altering the method the government uses to pay for Social Security and Medicare.  According to Senator Coburn their plan is probably the only plan that will ever pass.  “This is the first step in a long process. . .to get our finances back under control. . .it will buy us the time to get us down the road a little further to make additional changes that are going to have to be made.”    Notice he said down the road changes which is political speak for “after the election” and “then maybe never“.

The plan which would lower the top individual rate to 29%, lower corporate rates to 29% and abolish the Alternative Minimum tax is at least not fueled by class warfare resentment.  But unfortunately  the plan is simplistically vague.  Obama, who has never been involved in the gang negotiations announced the other day that “I wanted to give folks a quick update on the progress that we’re making.”

A big problem with the “plan” is that it could gut defense.   Representative Buck McKeon of California is concerned that although the gang’s proposal  is more of an outline rather than a plan, the numbers contained in the proposal do not meet the requirements for appropriate analysis or the more stringent requirements for budget scoring.  Using estimates contained in the plan, McKeon says it will cut almost $900 billion in national security spending over the next 10 years and asking the military to absorb half of the spending cuts is irresponsible.

Another big problem with the “plan” is that it requires Congress to find $300 billion in health care spending cuts and may require an additional  $200 billion in cuts.  This is on top of about $550 billion in Medicare cuts in Obamacare.  And let’s not forget the “death panel” mandated cuts.

According to Mark Steyn at “The Corner”, Americans who care about solvency ought to be seriously annoyed at the contempt shown by the Gang of 6, which even by the standards of bipartisan deal-making is a joke.  If you take the gang’s figure of half a trillion in immediate “aggressive deficit reduction” seriously, that only represents about what the U.S. government borrows every 4 months.

Michael Hammon of Redstate in his article “30 Problems with the Gang of 6 Proposal” said that  the proposal for rewriting the federal budget is like measuring a bucket of water by holding the water in your hand.

Personally, I think the whole process is a joke.  Neither side is serious about cuts.   We could balance our budget without any problems just by using some common sense.  They could start with reading and  implementing  the GAO annual report which identified waste and duplication amounting to hundreds of billions of dollars.  Then they could cut funding for NPR, the National Endowment for the Arts, Planned Parenthood, ACORN (or whatever their new name is), grants for stupid studies on fruit flies or  the size of a homosexual’s package, along with hundreds of other wasteful studies, cut the White House and Congressional salaries and benefit packages,  downsize the EPA, the FCC and the Department of Education, and repeal Obamacare.

Who is responsible for the mess we’re in?   We are!  We continue to elect and re-elect the same old tax and spend crowd.  Garbage In – Garbage Out.   We’ve allowed them to shut us down through intimidation –  to abandon what we know is right.

“Eventually the American taxpayer will get so fed up with these bunch of morons in Washington – Republican and Democrat – they are going to demand we take real action with real numbers, cut thru the crap and start dealing with this debt.  I think we’ll get something for six months, a deal these morons can get their arms around. . . and keep screwing around, kicking the can down the road and do nothing.”   Howard Davidowitz of Davidowitz & Associates, an investment banking firm.

“Politicans are like diapers.  They both need changing regularly and for the same reason.”     Unknown