Conspiracy is no longer a theory.

How many dots have to be connected before you wake up and see the true Obama? 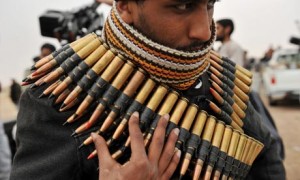 [PrisonPlanet] – The Obama administration is preparing to follow Britain in recognizing the rebel National Transitional Council as the official government of Libya by approving an embassy in Washington DC, which given the fact that the rebel army is spearheaded by Al-Qaeda militants who have killed U.S. troops would equate to Obama handing terrorists a diplomatic outpost on U.S. soil.

“The United States said Wednesday it was reviewing a request by Libya’s rebels to open an embassy in Washington, following Britain which expelled diplomats from Moamer Kadhafi’s regime,” reports AFP.

State Department spokesman Mark Toner told reporters that the U.S. would be “sympathetic” to the request, after which rebel supporters unfurled their flag outside the embassy where Gaddafi’s regime is still in control.

The United States formally recognized the rebel council as the country’s legitimate government earlier this month, despite the fact that the rebel army is spearheaded by Al-Qaeda terrorists who are supposedly the target of a multi-decade “war on terror” that is now in its tenth year and has cost the U.S. a staggering $5.4 trillion since 9/11.

Shortly after the start of the conflict in March, Abdel-Hakim al-Hasidi, the leader of the anti-Gaddafi rebel army, admitted that the rebel ranks include Al-Qaeda terrorists who have killed U.S. troops in Iraq and Afghanistan.

Al-Hasidi described the fighters as “patriots and good Muslims, not terrorists,” adding that “members of al-Qaeda are also good Muslims and are fighting against the invader”.

The Telegraph confirmed that Al-Qaeda fighters had joined with anti-Gaddafi rebels in a story entitled, Libya: the West and al-Qaeda on the same side, in which Richard Spencer writes how, “WikiLeaks cables, independent analysts and reporters have all identified supporters of Islamist causes among the opposition to Col Gaddafi’s regime, particularly in the towns of Benghazi and Dernah.”

Although NATO and the U.S. admit that “flickers” of Al-Qaeda members have infiltrated rebel ranks, in reality, they are leading the anti-Gaddafi forces in several areas of the country. As the Wall Street Journal reported in a piece entitled, Ex-Mujahedeen Help Lead Libyan Rebels, Al-Qaeda terrorists who worked directly for Bin Laden are recruiting, training and acting as front line field commanders for the rebel army.

Abdel Hakim al-Hasady, an influential Islamic preacher and high-school teacher who spent five years at a training camp in eastern Afghanistan, oversees the recruitment, training and deployment of about 300 rebel fighters from Darna.

Mr. Hasady’s field commander on the front lines is Salah al-Barrani, a former fighter from the Libyan Islamic Fighting Group, or LIFG, which was formed in the 1990s by Libyan mujahedeen returning home after helping to drive the Soviets from Afghanistan and dedicated to ousting Mr. Gadhafi from power.

Sufyan Ben Qumu, a Libyan army veteran who worked for Osama bin Laden’s holding company in Sudan and later for an al Qaeda-linked charity in Afghanistan, is training many of the city’s rebel recruits.

Former jihadist Noman Benotman, who renounced his al Qaeda affiliation in 2000, said in an interview with the Washington Times that he estimates 1,000 jihadists are in Libya.  Referring to the fighters as “freelance jihadists”, Benotman said that the men were part of a North African terror cell known as Al Qaeda in the Islamic Mahgreb (AQIM), and have completely infiltrated the rebel army.

A 2007 West Point report indicated that the Benghazi-Darnah-Tobruk area of Libya is a world capital for Al-Qaeda or mujahideen suicide bomber recruitment. Author Webster Tarpley details this intelligence in his excellent analysis piece, The CIA’s Libya Rebels: The Same Terrorists who Killed US, NATO Troops in Iraq.

In 2002, French intelligence experts revealed how western intelligence agencies bankrolled a Libyan Al-Qaeda cell controlled directly by Osama Bin Laden to hatch a plot to kill Gaddafi that was foiled in March 1996. The cell was led by Anas al-Liby, who was with Bin Laden in Sudan before Bin Laden returned to Afghanistan.

Indeed, it was Gaddafi’s Libya who put out the first Interpol warrant for Bin Laden’s arrest in 1998. Western intelligence agencies blocked the warrant from being pursued, allowing Bin Laden and Al-Qaeda to go on and kill more than 200 people in the truck bombings of US embassies in Kenya and Tanzania.

Some of the very rebels now being funded, trained, and offered embassies by Britain and the U.S. were part of the Al-Qaeda cell that tried to kill Gaddafi on behalf of the United States and Britain 15 years ago.

On Wednesday, Britain expelled Gaddafi’s diplomats and announced that it would be unfreezing $150 million dollars in Libyan oil revenue that would be used to directly fund the rebel army, abandoning any pretense that the intervention of NATO powers had anything to do with “humanitarianism,” which was the reason provided for the war back in March.

In recognizing Al-Qaeda led Libyan rebels who don’t even control the majority of Libya, and have virtually no control over key areas, as the official government, both Britain and the US are completely rewriting hundreds of years of diplomatic protocol.

While producing fearmongering videos which characterize white middle class Americans as the primary terror threat, the federal government is simultaneously about to hand an organization infiltrated and in some cases led by Al-Qaeda terrorists its own embassy inside the United States.

Having violated the constitution by ignoring his own lawyers in launching the war without congressional approval, Barack Obama is now directly aiding and abetting Islamic terrorists, breaking his oath to protect America against foreign belligerents by literally inviting the enemy within the gates.

I remember Obama saying that when he became president;  “You Muslims will see what I will do for you.”  [Obama is selling out America. How safe do you feel now?]

If this isn’t a solid case for the impeachment of Barack Obama, then nothing is.