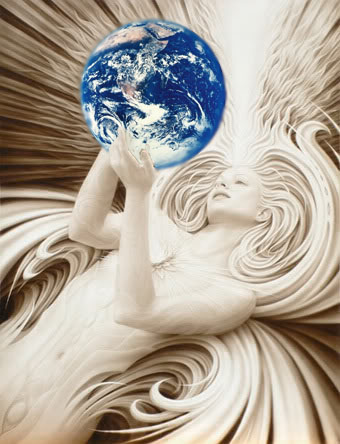 In 1973 UN Secretary-General U Thant and New Age activist Donald Keys founded Planetary Citizens, a UN  NGO (non-government organization) devoted to preparing people for the coming of the new culture.

Keys is involved with the Findhorn (New Age) Community in Scotland and writes for “One Earth”.  Findhorn promotes the New Age teaching as a spiritual community, ecovillage and an international centre for holistic education, helping to unfold a new human consciousness and creating  a positive and sustainable future. Keys was U Thant’s speech writer and co-authored several books on  disarmament and wrote his own book “Earth At Omega: Passage to Planetization” in which he said  “As regards to the U.N., the Member States are increasingly anxious to secure the benefits of a planetary management system [one world government].  They see more and more clearly that trying to fly Spaceship Earth from conflicting national outposts is futile.  Unfortunately, they are little more ready than they have been in the past to. . .voluntarily giving up their capacity to impose their will on others. . .Too many governments are acting as sour-faced guardians who resist participating in acts expressive of community. . .”

David Spangler,  spokesman for the Findhorn Community wrote this about the community’s beliefs:  “The true light of Lucifer cannot be seen through sorrow, through darkness, through rejection.  The true light of this great being can only be recognized when one’s own eyes can see with the light of the Christ, the light of the winter sun.  Lucifer works within each of us to bring us to wholeness, and as we move into a New Age, which is the age of man’s wholeness. . .Lucifer prepares man in all ways for the experience of Christhood and the Christ prepares man for the experience of God. . .the light that reveals to us the path to the Christ comes from Lucifer.  He is the light giver.  He is aptly named the Morning Star because it is his light that heralds for man the dawn of a greater consciousness. . .He stands no longer as the tester or the tempter but as the great initiator, the one who hands the soul over to the Christ and from the Christ on into ever greater realms. . .We can take all the scriptures and all the teachings and all the tablets and all the laws, and all the marshmallows and have a jolly good bonfire and marshmallow roast, because that is all they are worth.”

The Temple of Understanding is also an NGO with a goal of promoting understanding between religions.  Their website will tell you that Eleanor Roosevelt was “among the first to endorse the concept” saying “our world surely needs the inspiration and leadership of such a Spiritual United Nations.” The Temple’s founding friends and supporters were the UN Secretary-General U Thant, the Dalai Lama,  Pope John XXIII, Juliet Hollister, Ecumenical Patrirach Athenagoras, Dr. Sarvepalli, Sir Zasfrula Khan, Anwar al-Sadat, among others.

With deep connections to the U.N., the Temple is dedicated to advancing social justice in the global context of today’s world by promoting the UN Millennium Development Goals.

In the name of universal brotherhood and Gaia environmentalism, the UN is actively promoting a new paganism.   Much of the New Age transformation can be traced to Dag Hammarskjold,  U Thant, and Dr. Robert Muller.    In 1957, the World Goodwill Bulletin issued a special edition describing the United Nation’s Meditation Room which contained a fresco by Beskow, a friend of Dag Hammarskjold. “The stone in the middle of the room reminds us also of the firm and permanent in a world of movement and change. . .We may see it as an altar, empty not because there is no God, not because it is an altar to an unknown god, but because it is dedicated to the God whom man worships under many names and in many forms. . .There is an ancient Chinese saying that the sense of a vessel is not in its shell but in the void.  So it is with this room.  It is for those who come here to fill the void with what they find in their center of stillness.”   In a book “The Desire to be Human” edited by Robert Muller, it states that Dag Hammarskjold had ended up as a mystic – at the end of his life he held that spirituality was the ultimate key to our earthly fate in time and space.

U Thant replaced Hammarskjold as UN Secretary General in 1961.  Time magazine characterized Thant as taking “a hardheaded Western view of economics, while maintaining the Eastern mystic’s preoccupation with spiritual values.  Thant is quoted in Lewis Spence’s “Encyclopedia of Occultism and Parapsychology” as praising Hindu mystic Sri Aurobindo as “one of the greatest spiritual leaders of all times.”  Aurobindo taught that the “material world should be transformed by making one’s own life divine” and claimed “he had realized the ‘Overmind’ in 1926 and thus was able to bring divine consciousness to the task of human evolution.”  ‘Overmind’ is the plane of Gods – the highest consciousness one can achieve without transcending the mental system.

Dr. Robert Muller was the UN Assistant Secretary-General for some 40 years and became known as the “philosopher of the UN” because his ideas about world government, world peace and spirituality led to the increased representation of religions in the UN, especially the New Age Movement. He believed that world peace will ultimately depend on divine and cosmic government and an alliance between all major religions and the UN.   “Little by little a planetary prayer book is thus being composed by an increasingly united humanity seeking oneness.  Once again but this time on a universal scale, humankind is seeking n o less than its reunion with divine, its transcendence into higher forms of life. Hindus call our earth Brahma, or God, for they rightly see no difference between our earth and the divine.  This simple ancient truth is slowly dawning again upon humanity, as we are about to enter our cosmic age and become what we were always meant to be: the planet of God.”

Muller rewrote the first chapter of the Book of Genesis to make it refer to the creation of the United Nations.  “And God saw that nations of the earth, black and white, rich and poor, from North or South, from East and West, and of all creeds were sending their emissaries to a tall glass house [i.e. the UN Headquarters] on the shores of the River of the Rising Sun, on the Island of Manhattan, to stand together, to think together, and to care together for the world and all its people.  And God said: ‘that is good.’ And it was the first day of the New Age of the Earth.”   In his book, Decide To Be, Muller wrote of his New Age philosophy:  “Decide to open yourself to God, to the Universe, to all your brethren and sisters, to your inner self. . .to the potential of the human race, to the infinity of your inner self, and you will become the universe. . .you will become infinity, and you will be at long last your real, divine, stupendous self.”

After retiring from the UN, Muller founded and developed the United Nations University for Peace in Costa Rica.  The World Core Curriculum Manual described Muller’s educational project as having an “underlying philosophy on the teaching set forth in the books of Alice Bailey and the Tibetan teacher, Djwhal Khul [Alice’s phantom ghost writer].

In addition to the meditation room, the United Nation has a  Spiritual Caucus that supports the aims of the U.N. as expressed in the Preamble to the UN Charter seeking to balance and strengthen the endeavors of the UN system and its affiliates with inner reflection and stillness.  The 11 member Caucus meets  9 times a year in silent reflection.   Take a few minutes to read about these so-called Spiritual Caucus members.  They are all New Age worshippers.

The Preamble of the Earth Charter states that “we are one human family and one earth community with a common destiny.  We must join together to bring forth a sustainable global society founded on respect for nature. . .”   According to their website they plan on recruiting [through the schools] “your children to use the Earth Charter as a guideline in their work as active agents of change.”  The US Conference of Mayors is but one of hundreds of organizations, schools, municipalities, and other entities that have signed on as supporters of the declaration of a new “global ethic” for the world.

The Earth Charter initiative was launched in 1994 by Maurice Strong and Gorbachev, president of  Green Cross International.  Weeks before the start of Earth Summit II, the Earth Charter arrived in Johannesburg for a series of rituals, celebrations, and promotions aimed at setting the spiritual tone for the global conference, housed and transported in the Ark of Hope designed to look like the Ark of the Covenant and carried by its devotees with worshipful solemnity.   The Ark of Hope was decorated on its side with art work depicting earth, water, fire and air and on its top was the symbol of the 5th element – the spirit.  Accompanying the Charter and the Ark were the Temonos Books containing aboriginal Earth Masks and visual prayers/affirmations for global healing, peace, and gratitude, created by 3000 artists, teachers, students and mystics.  According to the Temenos Project, a temenos is a “magical sacred circle where special rules apply and extraordinary events inevitably occur.

Former Soviet Premier Gorbachev who has said that “Cosmos is my God.  Nature is my God,”  when speaking about the Earth Charter and the Ark of Hope – he said “Do not do unto the environment of others what you do not want done to your own environment. . .My hope is that his Charter will be a kind of Ten Commandments, a ‘Sermon on the Mount’ that proves a guide for human behavior toward the environment in the next century.”

You do realize that our tax dollars supports this nonsense!

The idea of a one world government has been around for a long time.  In the current charge toward one world government, the UN has to achieve unity on multiple levels, not just political.  What better way to bring the world into the circle than through the global warming scam and then tie them up neatly with a pretty pink bow under a one world religion –  Mother Earth Worship.