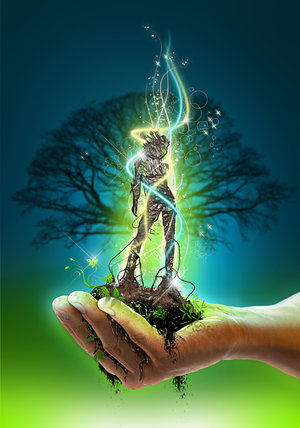 Twenty-five years ago, those who believed that Mother Nature (Gaia) should come  first and humankind second were part of a fringe, considered radical by most Americans.  Unfortunately, today that extremist environmentalist ideology has become mainstream.   Funding and policy comes from the most prestigious institutions and host of private family foundations.

The vast wealth that pushes the environmental movement would astound most people.  There are several thousand groups, just in the U.S., involved in saving the Earth.  The foundations, corporations organizations and individuals that back this radical movement comprise some of America’s top patrician families – the Rockefellers – George Soros – Maurice Strong – Bill Gates – Ted Turner – Prince Phillp – Prince Charles – Henry Kissinger – U.S. Government – The Trilateral Commission – the Club of Rome – the Council on Foreign Relations,  etc.

Maurice Strong is perhaps, more than any other living person,  responsible for and the driving force behind the development of a global agenda. Strong is a Socialist, his cousin Anna Louise Strong a Marxists.  He is closely aligned with Mikhail Gorbachev and was a participant in Gorbachev’s State of the World Forum in San Francisco in 1995.  Strong’s organization – Earth Council, and Gorbachev’s organization – Green Cross International,  work hand-in-hand.  Both he and George Soros are closely aligned with Al Gore, Gorbachev and Obama.

Strong was chosen to direct the Earth Summit I, in 1972 – Conference on Human Environment.   Prior to the conference Strong commissioned a report on the state of the planet – “Only One Earth: The Care and Maintenance of a Small Planet” which established the environmental movement worldwide leading to the U.N. Environmental Program with Strong as its first commissioner.

Strong convened the first international group meeting on climate change and continued to take the lead in implementing the results of the agreements established during Earth Summit I through the Earth Council, the Earth Charter, the World Resources Institute, membership on the board of the International Institute for Sustainable Development, Stockholm Environmental Institute, the African-American Institute.  He was also a long time director of the World Economic Forum, advisor to the President of the World Bank, advisor for the Center for International Development at Harvard, the World Business Council for Sustainable Development, the World Conservation Union, the World Wildlife Fund, and Resources for Future.   Maurice was also involved in the U.N. Education Scientific and Cultural Organization (UNESCO) where he promoted Gaia, the Earth God, among the world’s youth.  He was director of The Temple of Understanding in New York where he encouraged Americans concerned about the environment to replace Christianity with the worship of “mother earth.”

Strong’s wife Hanna is deeply involved in the New Age (Gaia) Movement.  She and Maurice purchased a large  ranch in San Luis Valley, Colorado  in 1978, and named it “Baca” (The Valley of the Refuge of World Truths) aka the Crestone/Baca Community.    Hanna  opened the land to what she referred to as the world’s religions – Jewish,  Catholic Monasteries, an Vedic Temple,  Hindu Temples, Islamic Ziggurat, along with Tibetan Monks and native American Shamans.

U.S. News and World Report, in November, 2007 ran an article “A Spiritual Community Takes Root” about the Crestone community.  The article stated  in part  “The result has been remarkable, with diverse spiritual groups living in close proximity and intermingling.  At the Christmas mass at the Roman Catholic monastery, whole rows get taken by Buddhist monks in their flowing robes.  Hindu nuns in saris umpire local baseball games.  When American Indians held a medicine wheel ceremony this summer, the offerings to the four directions were made by a Shinto priest, a Catholic nun, a Buddhist nun, and a Hindu yogi.  Tibetan Buddhism scholar Khenpo Tsultrim Gyamtso Rinpoche finds that having so many living masters in residence makes the area now the world’s best place to practice and meditate. . .Sister Kaye, a Carmelite nun, finds it validating to live amid so many faiths. . .Rabbi David Cooper, author of the bestselling “God Is a Verb” suggests that in Crestone is occurring a strange next step in human spirituality: “post-religious”, in which one can benefit from religion without being a believer/congregant.”

In 1992 at Earth Summit II, Secretary General of the U.N. Rio Conference, Maurice Strong told the crowd that industrialized countries have “developed and benefited from the unsustainable patterns of production and consumption. . .It is clear that current lifestyles and consumption patterns of the affluent middle class, involving high meat intake, consumption of large amounts of frozen and convenience foods, use of fossil fuels, appliances, . . .air conditioning and suburban house are not sustainable.  A shift is necessary toward lifestyles less geared to environmentally damaging consumption patterns.”    It was at Earth Summit II that Agenda 21 came of age.

Not to be outdone by her husband, Hanna was involved in the NGO alternative meeting at the Summit called Global Forum 92 where she had the Dalai Lama open the meeting.  In preparation for the Summit, Hanna is said to have held a three week vigil with Wisdomkeepers, a group of global tansformationalists – in an round-the-clock sacred fire, drumbeat and meditation session.

Strong is the author of most of the key UN environmental policies and plans, including Agenda 21, the Earth Charter, the  Kyoto Protocol and the UN report on Global Governance.  He  and his wife, Hanna also founded the Manitou Institute where various Hindu, Buddhist, and New Age  groups perform rituals to heal Gaia to “perpetuate the ancient tradition of peoples of many tribes journeying here for a sacred connection to the Earth.”

For the Gaia activists the theory of Global Warming has been (pardon the expression) a God send.  Agenda 21 and the Gaia perspective for a world without the use of fossil fuels, small sustainable human settlements surrounded by protected wild lands and governed by a central world government is utopia.  They have played the global warming scare as a means  to implement nothing more than  earth-worship.