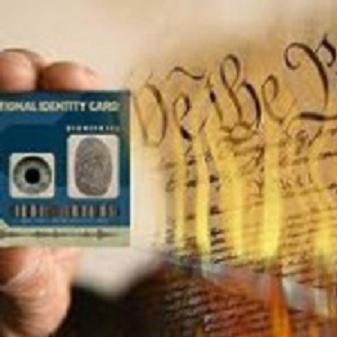 The hallmark of any successful police state is compulsory ID.   Not to worry – Janet Napolitano has taken up the challenge.  Of course she can not take full credit as this new ID was first proposed in 2002 under the Bush administration.

The Department of Homeland Security has officially launched a new DHS photo identification card using Tennessee as the Judas goat.  Beginning January 1, 2012, this new Police State ID is not optional in Tennessee – it is a state law that requires  all Tennessee citizens to present a federal or state issued photo ID in order to vote and those voter identification must be issued by the Department of Homeland Security.

Wait! –  isn’t Eric Holder fighting the concept of a state photo ID  in order to vote because it’s discriminatory?

But there lies the difference.   The new photo ID comes from the Department of Homeland Security which means they have the power to issue them to anyone they desire.  The states can’t possibly be trusted to issue voter ID – they would more than likely exclude illegal aliens, felons, those not registered to vote, dead people – all of whom the government can include.

How long do you think it will be before every state in the country follows Tennessee’s lead with a little nudging from the local DHS office?  DHS has embedded itself as a local franchise in every state and is working through state’s legislatures to turn America into a Police State.  What a concept!

Since its inception, DHS has grown into one of the largest and most powerful federal bureaucracies costing taxpayers as estimated $57 billion a year.   DHS is the “Haliburton” of federal agencies whose role is to “reorganize” federal and state emergency services, coordinate logistics, streamline interdepartmental communications and work out Critical Infrastructure Protection.   Like all other police state initiatives, it was constructed around  government created national fear and division.

Since 2008 all passports have been issued with RFID chips allowing the government to track your every move.  It will only be a matter of time until these new DHS Voter ID’s will alo be embedded with RFID chips.

If you want a glimpse into the future of our government’s identification card,  you need to look no further than India who has launched a new program to issue Unique Identificattion Numbers (UID) to all 1.2 billion residents under the “guise” of preventing identy  theft and welfare fraud.    Each UID will be tied to biometric data using fingerprints (of all 10 digits), iris scans (both eyes) and picture ID.  The government of India says that intelligence agencies will also use these UIDs for the purpose of monitoring bank transactions, cell phone purchases and movement of individuals and groups “suspected” of  terrorism.

The FBI already has plans to upgrade their fingerprint data base to the “Next Generation Identification” (NGI) that will hold iris scans, searchable face recognition technology, palm prints, measures of gait, voice records, and scars and tattoo searchable technology.   You don’t even have to be a criminal to end up in the face recognition database  – all it takes is someone taking your picture .

NGI  will offer quite a few perks to the government as they will able to swap information with the Department of Homeland Security, State Department, Justice Department and Department of Defense all the way down to your local police or sheriff office.     What Could Possibily Go Wrong!