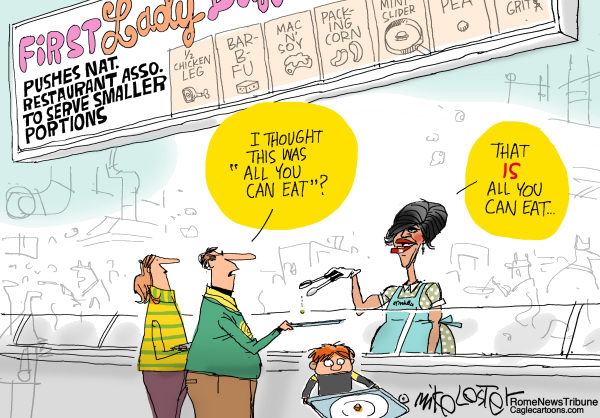 Moochelle and Pentagon officials announced to our armed forces during a visit to Little Rock Arkansas’s Air Force Base, the ‘Food Police’ were coming.

The announcement was made while visiting the dining hall while servicemen we eating broccoli, salads and whole grains.

“You all look really good, really fit.” Thank you for eating your vegetables. We need you strong.” Then Moochelle told one airman, “Don’t worry, you’ll be a vegetable guy soon.”

One has to wonder how our military ever managed to prepare a meal without mama Moochelle’s uninvited interference.

She stressed that it’s not just about giving members of the armed services a more svelte profile: There are big national security and budget implications. Yea right the budget! Moochelle can’t have you eating good food when there are vacations to be taken.

Under the Military Health System’s new obesity and nutrition awareness campaign, more fruits, vegetables, whole grains, lean meats and lower-fat entrees will be coming to the 1,100 service member dining halls across the United States in coming months. But Moochelle and her hubby will continue sucking down those ribs and burgers from 5 Guys, diners, drive-ins and dives.

Healthier choices will be turning up in base schools, vending machines and snack bars, too, distressing more than 1.5 million service members. Who’s up for a tofu bar or some genetically modified food from Monsanto? 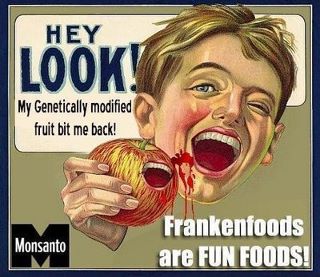 Moochelle who has been leading a campaign against childhood obesity, said the military effort would send a message to the whole nation.

Explain to me how the military is going to help childhood obesity. Children already have Popeye, and when did a child ever say, “Gee mommy, I want to eat what the military eats?”

“When you make healthy eating a priority in your lives, the rest of us are more likely to make it a priority in our lives.” Bull!

Did it ever occur to Moochelle that if her advice or input was wanted she would be ask. Moochelle should make it a priority to stay out of our personal lives and concentrate on improving her own.