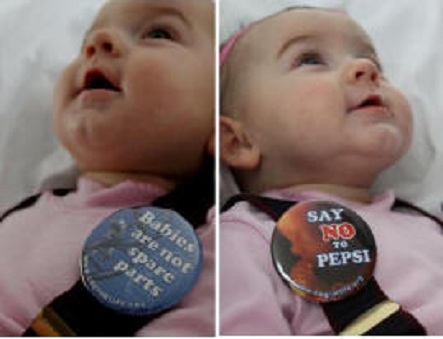 LARGO, FL, March 5, 2012 (Children of God for Life) – Pepsi Next, a new product which is set for release next week from the Pepsi Company, is facing a boycott as pro-life activists are protesting the company’s use of cells derived from an aborted fetus in flavor-enhancing research.

With help from the Obama administration, Pepsi has succeeded in keeping its controversial operations from consideration by its shareholders.

In a decision delivered Feb 28th, President Obama’s Security and Exchange Commission (SEC) ruled that PepsiCo’s use of cells derived from aborted fetal remains in their research and development agreement with Senomyx to produce flavor enhancers falls under “ordinary business operations.”

The letter signed by Attorney Brian Pitko of the SEC Office of Chief Counsel was sent in response to a 36-page document submitted by PepsiCo attorneys in January, 2012.  In that filing, PepsiCo pleaded with the SEC to reject the Shareholder’s Resolution filed in October 2011 that the company “adopt a corporate policy that recognizes human rights and employs ethical standards which do not involve using the remains of aborted human beings in both private and collaborative research and development agreements.”

Debi Vinnedge, Executive Director of Children of God for Life, the organization that exposed the PepsiCo-Senomyx collaboration last year was “appalled by the apathy and insensitivity” of both PepsiCo executives and the Obama administration.

PepsiCo lead attorney George A. Schieren noted that the resolution should be excluded because it “deals with matters related to the company’s ordinary business operations” and that “certain tasks are so fundamental to run a company on a day-to-day basis that they could not be subject to stockholder oversight.”

“We’re not talking about what kind of pencils PepsiCo wants to use – we are talking about exploiting the remains of an aborted child for profit,” she said. “Using human embryonic kidney (HEK-293) to produce flavor enhancers for their beverages is a far cry from routine operations!”

PepsiCo also requested the resolution be excluded because it “probed too deeply into matters of a complex nature upon which shareholders cannot make an informed judgment.”

“In other words, PepsiCo thinks its stockholders are too stupid to understand what they are doing with the remains of aborted children,” Vinnedge stated. “Well they are about to find out just how smart the public really is when they turn up the heat on the world-wide boycott!”

Oklahoma Senator Ralph Shortey has proposed a bill SB1418 banning the sale of products that are developed with or contain aborted fetal remains. In the case of Pepsi products, the cells derived from the aborted fetus do not end up in the final product.

“We commend the Senator for his courageous move,” noted Vinnedge. “The public is already saying no thanks to all Pepsi beverages and Pepsi Next is just that – the “next” product to avoid!”

read more at Children of God for Life, “Babies are not Spare Parts”

World Leaders of The Campaign For Ethical Vaccines, Medicines and Consumer Products

Note:  If you receive correspondence from PepsiCo denying the use of aborted fetal cell lines or their involvement with Senomyx, please send us a copy at: info@cogforlife.org

Or by US Mail to:

Children of God for Life

← Cousin to Obama asks; Is this still America?
Torch The Constitution: It’s Good For the Planet →