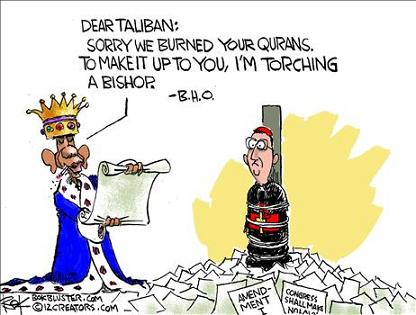 Thursday, Kathleen Sebelius of HHS, reached a new low when she told a House panel that “the reduction in the number of pregnancies compensates for the cost of contraception.”  Remember, the HHS mandate covers not only contraceptives but sterilizations and abortion inducing drugs.  Add the the HHS mandate to  taxpayer funded abortion and population control has now come of age.

Activist Kavita Ramdas recently said that contraceptives should be part of a strategy to save the planet.   By “empowering women” to avoid unwanted babies we could cut carbon emissions by 8 to 15%.  While she’s at it why not suggest they use euthanasia to take out the elderly, the disabled, and the rest of those that these nuts think don’t contribute to society or “empower women”.    Think how much carbon they could eventually prevent.

But while they attempt to play God, the rest of society is going to have to live with a few facts.   Obama’s attempt at destroying religious rights guaranteed by the First Amendment will devastate those that  most need the services provided by people of faith.

Earlier during the week Francis Cardinal George of the Chicago archdiocese sent a message to parishioners, letting them know that the HHS mandate would force them to close their hospitals, clinics, schools, and all other charitable organizations if the HHS mandate wasn’t rescinded.

“This year, the Catholic Church in the U.S. is being told she must give up her health care institutions, her universities and many of her social service organizations.  This is not a voluntary sacrifice.  It is the consequence of the already much discussed Department of Health and Human Services regulations  and promulgated for implementation beginning August 1 of this year.   Why does a governmental administrative decision now mean the end of institutions that have been built up over several generations from small donations, often from immigrants, and through the services of religious women and men and others who wanted to be part of the church’s mission in healing and education? . .The HHS regulations now before our society will make it impossible for Catholic institutions to follow their conscience. . .What will happen if the HHS regulations are not rescinded?. . .So far as I can see right now, will have one of four choices: 1) secularize itself, breaking its connection to the church. . .This is a form of theft.  2) Pay exorbitant annual fines to avoid paying for insurance policies. This is not economically sustainable.  3) Sell the institution to a non-Catholic group or government.  4) Close down.”

I hope the Catholic Church and all other faiths that have joined them stand their ground.  As much as I would hate to see an additional one-half  million lose their jobs, and the health care system thrown into further disarray,  if we don’t stand our ground, the Constitution will no longer matter and our Republic  will cease to exist.

Almost 32% of their hospitals are located in rural areas where patients have few health care options.

Catholic hospitals lead in breast cancer screenings, nutrition programs, trauma centers, geriatric services and social services.  When patients have trouble  paying their bills the Catholic hospitals cover more of the cost than private hospitals.  For instance, in Florida their hospitals provides free care to families below 200% of the federal poverty line, accepting Medicaid reimbursement as payment in full.  They also cap costs at 20% of household income for families that fall between 200-400% of the federal poverty line.

If these hospitals are closed, along with the  400+ health centers and 1,500 specializing homes, 1 in 6 patients will have to vie for health care services in the rest of the system which would have to absorb almost $100 billion in costs a year.  Over 120,000 hospital beds will disappear overnight from an already stressed system.   The poor and working class families will have to pay more out of pocket for services and rural patients will have to travel further for care.  Over 500,000 additional people will be needlessly out of a job.

And, its not just health care.  Over 7500 primary and secondary schools would close.  Based on an average of $8,000 cost per pupil in the public school system, Catholic schools save taxpayers about $20 billion a year for the more than 2.5 million students they educate.

Catholic Charities provides emergency food to about 6.5 million people, provide temporary shelter to over 200,000 people and a range of assistance to another 1.5 million for clothing, finance, utilities and medications.   These will also disappear.

“The observance of Lent reminds us that, in the end, we all stand before Christ and give an accounting of our lives.  From that perspective, I ask lay Catholics and others of good will to step back and understand what is happening to our country as the church is despoiled of her institutions and as freedom of conscience and of religion become a memory from a happier time.”