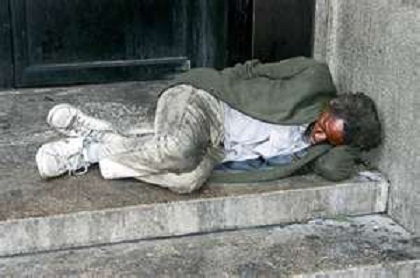 So much destruction to our way of life has happened since Obama was sworn into office along with his partners in crime Communist administration . When it comes to food, you would think that Michelle sticking her nose in the feeding habits of our families was bad enough. But no, they are taking it farther than that. Now, they no longer want us to feed the hungry.

Dear God, we’re allowed to feed stray dogs and pigeons; are humans not above animals? This is more than control, this is cruelty at it’s worse.

Feeding the homeless has been banned in many cities across the country. Some cities use the excuse they are concerned about the “health risks” of the food being distributed by ordinary “do-gooders”, while others are passing these laws because they do not want homeless people congregating in city centers where they know that they will be fed.

This is political BS. Hungry people eat out of trashcans and dumpsters, and these government bureaucrats claim to be worried about a health risk. Do these people even listen to themselves? There is no logic in their thinking, only more rules, regulations and laws to control our lives.

Philadelphia Mayor Michael Nutter has announced a ban on the feeding of large numbers of homeless and hungry people at sites on and near the Benjamin Franklin Parkway.

Mayor Nutter is imposing the ban on all outdoor feedings of large numbers of people on city parkland, including Love Park and the Ben Franklin Parkway, where it is not uncommon for outreach groups to offer free food.

Nutter says the feedings lack both sanitary conditions and dignity.

Police arrested a group of activists down in Orlando, Florida for feeding the homeless in defiance of a city ordinance.

In Houston, a group of Christians was recently banned from distributing food to the homeless, and they were told that they probably would not be granted a permit to do so in the future even if they applied for one.

Bobby and Amanda Herring spent more than a year providing food to homeless people in downtown Houston every day. They fed them, left behind no trash and doled out warm meals peacefully without a single crime being committed, Bobby Herring said.

That ended two weeks ago when the city shut down their “Feed a Friend” effort for lack of a permit. And city officials say the couple most likely will not be able to obtain one.

“We don’t really know what they want, we just think that they don’t want us down there feeding people,” said Bobby Herring, a Christian rapper who goes by the stage name Tre9.

Dallas has also adopted a law that greatly restricts the ability of individuals and ministries to feed the homeless.

New York City has banned all food donations to government-run homeless shelters because the bureaucrats there are concerned that the donated food will not be “nutritious” enough.

The Bloomberg administration is now taking the term “food police” to new depths, blocking food donations to all government-run facilities that serve the city’s homeless.

In conjunction with a mayoral task force and the Health Department, the Department of Homeless Services recently started enforcing new nutritional rules for food served at city shelters. Since DHS can’t assess the nutritional content of donated food, shelters have to turn away good Samaritans.

I for one could never comply with such idiotic laws as to turn someone away because they were hungry. Seems as though the government not only wants you down and out, but now they want people to starve. These people are sick-in-the-head!

← Another Abuse of Power
Ruger Receives Over 1 Million Firearm Orders →