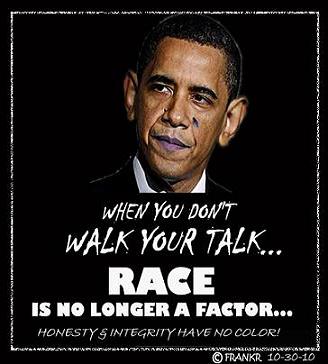 During the first part of May, House Democrats actually received training on how to play the race card, which is a pretty good indication  that Obama plans on making it a large part of his re-election campaign.

A staffer for Representative Barbara Lee, D-CA, explained that Maya Wiley had been invited to run the Democrats “through their strategy and how they message and talk about stuff” pertaining to race and fiscal policy.  The prepared content indicates that Democrats will seek to portray apparently neutral free-market rhetoric as being charged with racial bias, conscious or unconscious.

In her distributed remarks, Maya Wiley of the Center for Social Inclusion criticized “conservative messages [that are] racially ‘coded’ and had images of people of color that we commonly see “used” and proposed tactics for countering the Republicans’ [presumably] racially-coded rhetoric.  Using a slide show called “The Country is Turning Brown”, Wiley said that young adults of color, ages 20-34 will be the majority of all people by 2032.

As samples of race-coded rhetoric, she reminded Democrats of statements by Republican presidential candidates, specifically of Newt Ginghrich’s remarks calling Obama  “the food president” which Wiley says is a racist statement, even if Newt “did not intend racism.”

She warned Democrats about talking to “someone [who] opposes racial justice” but  that could support Democratic policies:  “Don’t make the mistake of telling them they’re in the problem.  It’s emotional connection, not rational connection that we need.”  She proposed the use of “race explicit” anecdotes to illustrate problems like the economic crises.  “Explain how each racial group is affected [recognize their pain] but start with people who are white.  Then raise racial disparities.”  As an example she suggested “Home ownership is the American Dream.  It hurts the same to lose your home if you’re White, Asian, Latino or Black”.

Wiley also urged Democrats to appeal to “white swing voters while building support among voters of color.”  Of course, Democratic outreach to white voters needs to communicate that “people of color are in pain and it’s the same pain, I, as a White person, would or do feel.  It’s about humanizing people of color.”

Do I understand Ms. Wiley correctly?  Is she accusing white people of not believing that people of “color” are human?

According to Wiley’s website, “right-wing rhetoric has dominated debates of racial justice — undermining efforts to create a more equaly society, and tearing apart the social safety net in the process” for over 25 years.  The Center for Social Inclusion is funded by George Soros through the Tides Foundation.

Maya formerly served as Senior Advisor on race and poverty to the Director of U.S. Programs of George Soro’s Open Society Institute and helped George develop and implement the Open Society Foundation – South Africa’s Criminal Justice Institute.  She previously worked for the ACLU, and the NAACP Legal Defense and Education Fund.  She has served on the boards of Human Rights Watch and the Council on Foreign Relations and currently chairs the Tides Network Board.  She also served on the Editorial Advisory Group, along with Frances Fox Pivens, Noam Chomsky, Michael Lerner etc., of the progressive magazine “Social Policy.”  Many contributors to “Social Policy” are connected with the Democratic Socialist of America.

The Tides Center Board chairman is Wade Rathke, a member of the Tides Foundation Board and protege of Maya’s late father, George Wiley.  Rathke served as president of New Orleans based Local 100 – SEIU and is founder and chief organizer of the Association of Community Organizations for Reform Now — ACORN.

If you want a good example of how the race card will be used in the election, read the Washington Post’s article that questions “Is It Racism.”    During the Arkansas and Kentucky Democratic primaries, Obama lost 42% of the vote to a challenger in Arkansas and 42% to “uncommitted” in Kentucky.  The Washington Post is arguing that “conservative white democrats don’t want to vote for an African American for president and are therefore willing to cast a ballot for almost anyone else up to and including an incarcerted felon (in the West Virginia primary).

Of course it has to be  racism –  there is no way those dumb southern white democrats could have figured out that Obama’s policies are destroying the country  –  or could they?