For more than a decade, the British police had known that Muslim rape gangs were targeting young British girls but for the sake of “political correctness” they declined to intervene.  After all, no one wants to be labeled a racist or Islamophobic  –  better to let the young girls suffer. 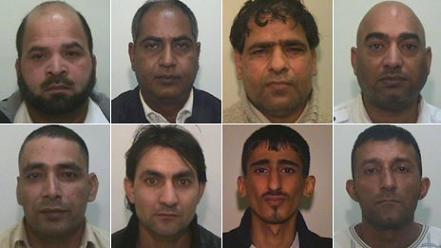 Detectives who finally brought down the “child sex grooming ring” in Liverpool are currently investigating at least 40 other cases of child rape perpetrated by Muslims in northern England.

Of the nine defendants, 8 of which are pictured here, one was from Afghanistan and the other 8 from Pakistan.  These men were sentenced to a total of 77 years after being convicted, finally, of rape, aiding and abetting rape, conspiracy to engage in sexual activity with a child, sexual assault and trafficking for the purpose of sexual exploitation.

Judge Gerald Clifton told the defendants that their claim of being targeted by racism was nonsense.  “The girls had been raped callously, viciously and violently” at a time when they were going through difficult periods in their lives. . .You attracted them to your company by flattery, free food, and alcohol.  Some of you acted to satiate your lust, some to make money out of them.  All of you treated them as though they were worthless and beyond all respect.”

Apparently the police had known about the  “child sex grooming ring” since 2008 when a 15 year old girl asked for their help, even providing DNA evidence but police decided not to follow through with an investigation because “she would not be a sufficiently credible witness to put before a jury.”  It was only after social workers noticed an upsurge in cases of “child grooming” that they finally decided to do something about the problem.

Of course there are still those on the “political correctness” bandwagon that are arguing it was only a coincidence that the rapists were Muslims and these Muslim men were victims themselves.  It doesn’t matter that some of them told their victims it was okay for them to be passed around for sex with dozens of men “because it’s what we do in our country.”  A historian, Dr. Starkey, another p.c. apologists said “those men were acting within their own cultural norms.  Nobody ever explained to them that the history of women in Britain was once rather similar to that in Pakistan and it had changed.”

Former MP for Keighley, Ann Cryer said that she had campaigned to bring the issue to light; the girls were “betrayed” and condemned to “untold misery” by the police and social services.  “This is an absolute scandal.  They were petrified of being called racists and so reverted to the default of political correctness.  They had a greater fear of being perceived in that light than in dealing with the issue in front of them.”

Baroness Sayeeda Warsi, a senior Muslim politician told the London Evening Standard that there are “Pakistani men who believe that white girls are fair game.  And we have to be prepared to say that.  You can only start solving a problem if you acknowledge it first.” Warsi added  that the “color of the victims’ skin, as well as their vulnerability, helped to make them a target” and   some Pakistani men “see women as second class citizens and white women probably as third class citizens”. She  called on the British authorities to stop being squeamish about investigation allegations involving Muslims.  “Cultural sensitivity should never be a bar to applying the law.”

A few days after the men above were sentenced to prison, the Greater Manchester Police arrested another 9 Muslims, ages 24 and 38, on suspicion of sexually abusing a child and a week later arrested another two Muslims on suspicion of sexual assault and rape.  A Manchester Police spokesman said the arrests were the results of an inquiry ongoing since 2005.

Political correctness is a tool used by the left to change speech and thought patterns to advance an agenda.  It is a sophisticated, dangerous form of censorship and oppression entrenched in education, religion and government that is dangerous,  For 7 years, Muslim gangs were allowed to take advantage of the UK’s  fear of offending someone as they knowingly  sacrificied their children on the alter of political correctness.