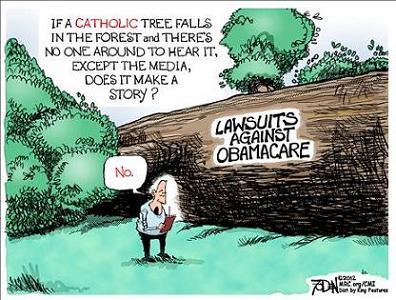 Obama painted the Catholic church into a corner and now they’ve come out fighting.   Forty-three plaintiffs, including the archdioceses of New York and Washington, and the University of Notre Dame, have filed twelve separate lawsuits against the Obama administration, alleging violation of First Amendment religious rights.

Catholic leaders have been allies of the Democratic Party for decades, championing social justice, welfare liberalism and higher taxes.   They were even instrumental in helping to pass Obamacare, which Obama used against them, siding with  the secular progressive left.   Please don’t take this as a slur against the Catholic Church but reason would tell you that  if you play with snakes you are going to get bit.

But, this is not just a Catholic problem.   The HHS mandate is an attempt to  force all Christians into accepting their secular radical agenda.   For decades, the secular elites have sought to eradicate our Judeo-Christian heritage from the public square.  They have imposed murder on demand, taken down the Ten Commandments from the public square, banned prayer in public schools, glorified sexual promiscuity, attempted to force acceptance of  homosexual marriage and passed hate crime legislation that could easily be used against the pulpit.

For Catholics the issue at stake is who heads their church, Pope Benedict XVI or Barack Obama.    For Christians the issue is who sets the tenants of their faith – the secular left or Christ.

Obama’s contraceptive mandate is the culmination of liberalism’s war on Christianity.  The issue at hand is not women’s health – it’s the First Amendment.

In a document already posted on the website of the U.S. Conference of Catholic Bishops and to be inserted into church bulletins in Catholic parishes around the country in June,  the bishops write that “some unjust laws impose such injustices on individuals and organizations that  disobeying the laws may be justified.  Every effort must be made to repeal them.  When fundamental human goods, such as the right of conscience, are at stake, we may need to witness to the truth by resisting the law and incurring its penalties.”

Bishops have also called for “A Fortnight of Freedom” which they describe as a special period of prayer, study, catechesis, and public action, to take place from June 21 to July 4.  They are also asking that you send messages to HHS and your Congress representatives telling them to uphold religious liberty and conscience rights.

This is not a fight over abortion or birth control.  It is about whether or not a government official can force you to violate your religious beliefs.   When it comes to the separation of church and state there must be absolutes. Obama’s assault on religious liberty is out of touch with the value that Americans place on their religious freedom and falls well outside of the Founding Father’s view of  constitutional protections afforded to religious liberty.  It Is Simply  —  Unconstitutional.

In 1963,  Martin Luther King, Jr., wrote in his famous “Letter from  the Birmingham Jail”  — “the goal of America is freedom.”  As a Christian pastor, he argued that to call America to the full measure of that freedom was the specific contribution Christians are obliged to make.  He rooted his legal and constitutional arguments about justice in the long Christian tradition: ” I would agree with Saint Augustine that ‘An unjust law is no law at all’. . .A just law is a man-made code that squares with the moral law or the law of God.  An unjust law is a code that is out of harmony with the moral law.”

Americans across the U.S. will meet simultaneously on Friday, June 8 at Noon  at the Nationwide Stand Up for Religious  Freedom Rally,   You can go to this web link to find a rally in your area.  In Virginia, rallies are scheduled in Charlottesville at Jackson Park; in Roanoke at the Lee Plaza; and in Virginia Beach at the Town Center.

If each of us does just a little, together we can accomplish a lot.