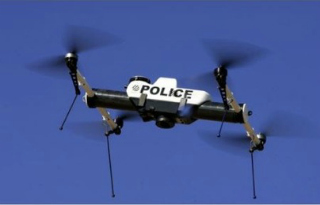 Obama sent the country a Valentine’s Day Card on February 14, 2012, when he signed  HR 658, the “Federal Aviation Administration Air Transportation Modernization and Safety Improvement Act.”   In part, this bill which was introduced by Rep. John Mica, R-FL, in February of 2011,  allows domestic use of aerial drone spy planes.

Jay Stanley, senior policy analyst for the ACLU’s Speech, Policy and Technology Project, says that domestic drone deployment is “bad from the point of view of the Constitution because the founding fathers put in place rules to prevent us from being surveiled 24/7.  They’re bad from a policy perspective because no one wants to be constantly watched.”

According to Kashmir Hill of Forbes,  it is nearly impossible to oppose drones because “the battle for public privacy has already been lost,” citing the prevalence of security cameras in U.S. cities such as Chicago, New York and San Francisco.  “The FAA has tried to restrict [drones] but there is a lot of demand from Congress, the drone industry and law enforcement to speed up their deployment.  Congress just funded them to the tune of $63 billion and tasked the FAA to work out how drones will be used commercially before 2015.”

The ACLU says that no one is challenging the notion that law enforcement does not have the right to trail  suspect for a couple of blocks but “drones can surveil you 24/7 and you don’t even know they are there, then it becomes a much bigger legal issue.”   As with any new technology, “when the novelty wears off and people start seeing the unintended consequences of constant surveillance” Stanley says there will be a backlash from the public.”

Virginia Governor Bob McDonnell supports the use of unmanned police drones flying over the State as “great” and “the right thing to do” because it would make law enforcement “more productive” and “cut down on manpower” and because “we use it on the battlefield.”   Did McDonnell just declare Virginia a war zone?

Get real people —  do we really want or need military technology, that is very effective at killing people with surgical procedure,  to police Virginia?  Already Drone manufacturers are considering offering police the option of arming drones with nonlethal – at least for now – weapons like rubber bullets, Tasers, and tear gas.

Isn’t it enough that DHS has already subsidized police department purchases of  security cameras and military gear such as urban assault vehicles and military grade surveillance blimps with night vision cameras?  I thought the purpose of law enforcement  was to  “protect and serve”  –  not “wage war.”

Do we really want or need our every move to be monitored, tracked, recorded and scrutinized by the authorities?

Drones can be as small as a bird and operate like helicopters.  Smaller models are launched by tossing them into the air, propelled by hand like a child’s glider.  A few use rocket boosters to leap into the air.   Larger drones can carry enough fuel to maintain surveillance for 20 hours or more as they invisibly trace a racetrack pattern 10 miles above the earth.   Some military drones are believed to contain facial recognition and other capabilities that enable them to positively identify a specific suspect from several miles away.  Many have infrared cameras that can see through walls, revealing anything that is happening behind closed doors, inside buildings and private homes.

Today  some 45 nations are building or buying robotic weaponry.  Virtually undetectable, the unmanned aircraft can loom over a target for hours before they strike without warning.  In the hands of terrorists, they could prove to be a nightmare for America.

In August 2006, Israeli jets shot down two primitive  drones in northern Israel.  An image on a wrecked tail-fin boldly declare their point of origin.   It was a green fist clutching an AK-47 – the symbol found on the flag of Hezbollah.

If you think that being frisked every time you visit an airport is intrusive, wait until you live in a world where you never know what’s circling 20,000 feet over your head.