If I also had a son: celebrities weigh in Nancy Pelosi: “… he’d owe China $256,000,000 before he reaches puberty.”
George Soros: “… he’d own a chauffeured tricycle.”
Bill Clinton: “… he’d know what ‘is’ is.”
Hillary Clinton: “I already have a son and his name is Bill.”
Michael Bloomberg: “… he wouldn’t be eating trans fats – or he’d be out of the will.”
Harry Reid: “… he wouldn’t smell like the unwashed masses visiting the Capitol.”
Sheriff Joe Arpaio: “… his birth certificate wouldn’t have PDF layers.”
Donald Trump: “What Sheriff Joe said.”
Al Sharpton: “… he wouldn’t be a honky or one of them Jews.”
Michael Moore: “… I wouldn’t eat him as long as he doesn’t get between me and the fridge.”
Joe Biden: “I have a son? Have we met?”
Rosie O’Donnell: “… I’d keep him in a cage and train him to attack toupees, and then I’d invite Donald Trump over and open the cage.”
Oprah: “… I’d keep him away from Rosie O’Donnell.”
Anita Dunn: “… I’d name him Mao Tse-Dunn.”
Eric Holder: “… I’d tell him he was conceived during fast and furious, then I’d smuggle him into Mexico.”
Occupy Theoretician Elizabeth Warren: “… I’d wait for him to crap all over himself, then throw him at the police.”
Debbie Wasserman Schultz: “… I’d hire Bill Maher to teach him manners and Anthony Weiner to teach him photography.”
Safe Schools Czar Kevin Jennings: “I’d teach him to have safe sex – with me.”
HHS Director Katherine Sebelius: “I’d give him an exemption from ObamaCare.”
Mitt Romney: “I’d give him an exemption from RomneyCare.”
John Edwards: “… I’d bequeath to him my secret to silky, sensuous, and coquettish man-hair.”
Al Gore: “… I’d cut his feet off so I wouldn’t have to worry about his carbon footprint.”
Science Czar John Holdren: “I can’t have a son; I cut my testies off so I can sleep at night not worrying about overpopulation.”
An anonymous Georgetown Law Student: “Having blown my entire trust fund on contraceptives, I better not get pregnant with a son!”
Supreme Court Justice Ruth Ginsberg: “… I’d send him off to South Africa, they have a better constitution.”
CNN host Soledad O’Brien: “… I’d read him fairy tales, starting with Critical Race Theory.”
MSNBC host Chris Mathews: “… I’d tell him bedtime stories of the adventures of the heroic knight, Sir Barry Obama, unless instructed otherwise.”
Robert F. Kennedy XXXLXVII: “… I’d name him ‘Robert F. Kennedy XXXLXVIII.'”
Charlie Sheen: “… I’d pay him to go away.” 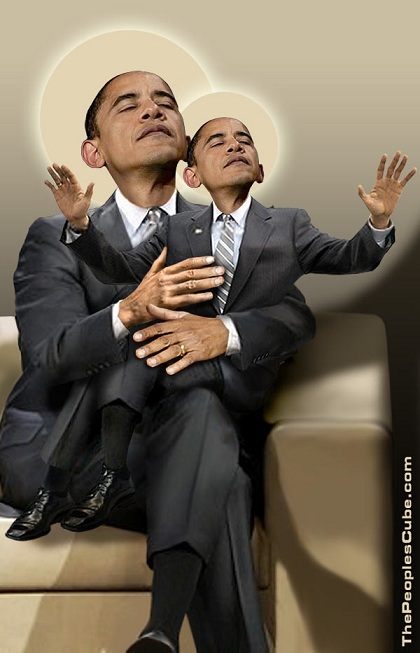