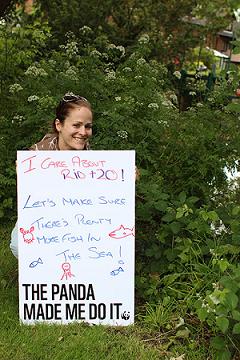 Still adhering to the  climate change scam – polar bears without ice floes, oceans rising,  the sky is falling, etc. –  environmentalist are still tweaking the  scare  to  push not only for sustainable “housing” development but for sustainable forest management, and conservation of mountains, and a diverse biosystem,  more endangered species and a lot of tree hugging.

They insist that all nations sign the Law of the Sea Treaty putting all oceans under the central control of the United Nations  so that they can  either suspend or cut current fishing limits  (so we don’t run out of fish).  They also want all nations to sign and ratify  the UN Convention Against Corruption.    Last year Holder called on all nations to ratify the treaty “against corruption” which requires members to pass and enforce a range of laws promoting government transparency and targeting graft.   All we need is more laws  that Obama and  Holder  can ignore.  Isn’t it funny that Holder could push for a treaty that requires transparency when he has spent so much time refusing to turn over paperwork  on Fast and Furious to the Senate?

Environmental Nazis also  urged all nations to “refrain from promulgating and applying any unilateral economic, financial or trade measures” that don’t adhere with “international law or the UN Charter.”

According to the Nazis, Education is a right for everyone (except maybe for  dumb old climate deniers).  They  want amnesty for all illegal immigrants – translation – open borders.  Then there are new controls on management and regulations for mining and  they insist that nations indoctrinate their children with sustainable development propaganda (like they aren’t already).  A few other “minor”  ideas they toss out in the Book of Wishes  involves controlling land use, acceleration of regulations to cut  all global greenhouse gases by phasing out “inefficient” fossil fuels,  gender equality and women’s empowerment.  While they did not mention specifically population control it was alluded to in their section on control of food production and agriculture.  And, what Wish Book wouldn’t be complete without a demand for full implementation of Agenda 21.

They seemed to have dropped demands for “specific new taxes”  with the  exception  the  0.7% of GDP transferred to the United Nations.  (In the U.S. that would cost each household $1,300 a year).  However, they want all “developed nations to restructure taxation” and phase out subsidies to the dirty fossil fuel industry so that “money can be used to help subsidize developing nations.”

Senator Inhofe  sent his regards to RIO via video.

Obama has not only managed to avoid the conference but his cronies in D.C. haven’t even made mention of it.  The bottom line:  Obama is running for re-election and too busy running around the country trying to convince American voters that he is now  the new “fossil fuels” president  –  he loves oil, gas and coal.   Hanging out in RIO with the environmental Nazis could hurt his chances to win and GOD HELP US if he does!   That 49 page Nazi “Book of Wishes” will become American policy!