Two years after funding a pro-marriage politician, Target Corporation  has decided to provide free advertising and to raise funds for the Family Equality Council (FEC), a homosexual political advocacy group, whose primary purpose is to have legislation passed, both on the state and  national level, to force all adoption agencies to no longer prioritize placing a child in a home with both a mom and dad.   This type of legislation would effectively shut down all religious based adoption agencies.

During the month of June, Target’s “Love is Love” campaign is featuring a selection  of homosexual themed shirts , two by designer Gwen Stefani, and will donate 100% of the proceeds to the FEC, which Target estimates will be around $120,000.

The Family Equality Council has a primarily ally in its fight against religious organizations and the Defense of Marriage Act (DOMA), in  President Obama who already tampered with religious freedoms in ObamaCare and  noted that he felt DOMA  was unconstitutional and ordered Holder not to  defend it in court.  He has since came clean on his support for same-sex marriages citing the Golden Rule and conversations with his daughters as his motivation.  Nothing like throwing in a little religion and family to make your motives sound pure!  Of course Obama has always supported same sex marriage, he just didn’t want it to become public during an election year.

Target has joined the  chorus of same-sex marriage proponents such as Microsoft, Levi’s, Nike, Amazon, General Mills, Apple, Google, Home Depot, Macy’s, Starbucks and J.C. Penney.  I don’t know how sales are going for the majority of these corporations but at J.C. Penney, things haven’t been too good!

J.C. Penney with its Christian family oriented roots has undergone a radical transformation.  Even with homosexuals comprising only 1% of U.S. households, J. C. Penney hired  Ellen Degeneris, an outspoken homosexual,  to be the company’s spokesman.  Don’t get me wrong –  I like Ellen, she makes me laugh.  But to hire an outspoken lesbian to be the spokesperson for a retail establishment that caters to families, is not the brightest of ideas.

Alienated by their lesbian Mother’s Day advertising, Christian groups vowed they would boycott the store. 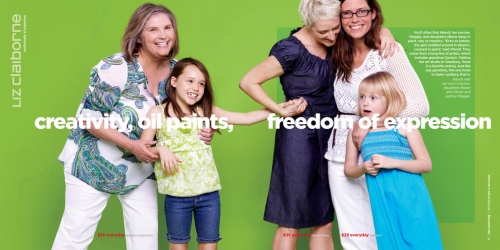 The caption to this ad read Wendi with her Mom Carolyn, daughters Raven and Clover and partner, Maggie.

And despite all the protests from family groups around the country,  Penney dug their heels in and ran the following ad for Father’s Day. 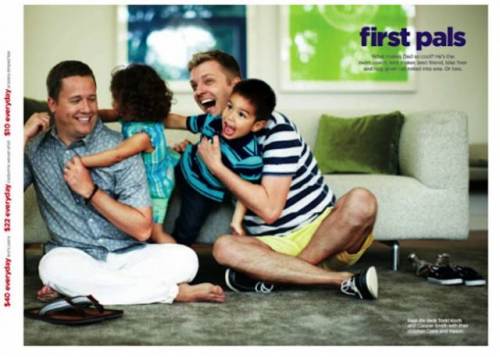 The caption read:  “What Makes Dad So Cool? He’s the swim coach, tent maker, best friend, bike fixer and hug giver – all rolled into one.  Or Two.”

According to the Wall Street Journal, Penney’s stock has lost more than one-third of its value and posted a $163 million loss with sales falling 20% in the first quarter of this year.  Father’s day sales were also a bust.  Last week, Penney’s shares fell 8.8%, to the lowest level in a year and store traffic was down 10%.   Even the Wall Street Journal had to ask  is  J. C. Penney to become Gay C Penney?   Have these losses been due to boycotts or just bad management?  Who knows but it should give their executives reason to pause and rethink their new advertising campaign.

Retail establishments have to appeal to all customers.  Catering to homosexuals may earn you a pat on the back from the Human Rights Council but in the long run it’s bad for business.  Americans want corporate neutrality in the cultural wars and when we don’t find it, we vote with our pocketbooks.