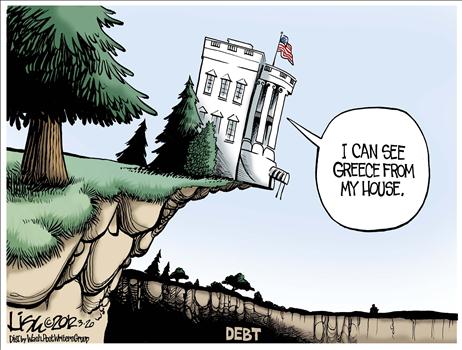 Congress’s inability to pass a a budget  may soon have greater consequences for Americans than most realize – such as another downgrade which would spell doom for the economy and the stock market with the potential to erase billions in personal wealth.

Congress’s failure to reach a meaningful course of action would not only erode what little confidence that remains in our government but also could trigger a budget sequester –  automatic, across the board spending cuts to defense and domestic programs.  It could shrink our Navy to the smallest number of ships since 1915; reduce our Air Force to its smallest size ever; and cut Medicare benefits by $123 billion.

But, even if Congress could agree to a workable solution, if the structure of the spending cuts and new taxes aren’t just right, it could result in economic contraction which in of itself could trigger another debt downgrade and further thwart GDP growth.

Either way – we lose.

Having just fought the Revolutionary War to gain independence from Britain, the Framers of our Constitution knew, firsthand, that over time, the government itself can become the plague.    Understanding this, the Framers added an ingenious escape hatch to the Constitution.  Although it’s never been used in the history of this country, it is the only plausible strategy for forcing fundamental reform.

“If we do not provide against corruption, our government will soon be at an end,“ so said George Mason,  Virginia Delegate at the  U.S. Constitutional Convention in 1787,  convened in Philadelphia with the “sole and express” purpose to make it possible for the Constitution to be amended, as needed, through Congressional mandate or by calling for a convention.

To date, all 27 amendments have been passed by  the traditional route – Congress proposing an amendment and states ratifying it.  But, our Framers forever etched another  resolution onto parchment – that Congress must “call a convention” to consider proposals to amend the Constitution if two-thirds of the state legislators ask it to.

Even though this has never been done, the specter of a convention can scare Congress into action.  They quickly pushed through the 17th amendment when the states came within one vote of calling for a convention.  For those not familiar with the 17th Amendment –  it  changed the way Senators were selected by the states to an election by the people.

Lawrence Lessig in “Republic Lost: How Money Corrupts Congress – And A Plan To Stop It” said that “sometimes an institution becomes too sick to fix itself.  Not that the institution is necessarily blind to its own sickness.  But that it doesn’t have the capacity, or will, to do anything about it. . . Sometimes an institution, like an individual, needs an intervention from people, from friends, from outside.”

By its very definition, a convention is intended to be a grass roots effort, with policymakers kept a safe distance from the process. With so much corruption in politics, rallying around a big idea is actually the easy part.  The hard part, organizing a movement strong enough to support a convention, and the only way to do that is at the local level.

A convention isn’t about whether you lean to the left or the right.  It’s not about whether you’re Republican, Independent Libertarian or Democrat or whether you live in a Red state or a Blue state.  It has nothing to do with race, ethnicity, or your religious beliefs.  It is about one thing, and one thing only – REFORM.

Read: Save Congress From Itself: The Framer’s Secret Resolution here.

“The budget is like a mythical bean bag.  Congress votes mythical beans into it, then reaches in and tries to pull real ones out.”   Will Rogers

1 comment for “Gridlock Is A Luxury We No Longer Can Afford!”