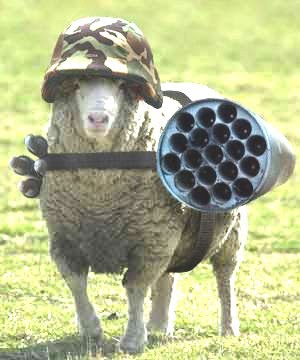 Democracy is two wolves and a lamb deciding what to have for dinner.  Liberty is a well armed lamb.

Since his election, Obama and his far left Socialist crowd have done everything in their power to keep their anti-gun agenda under the radar.

Obama spent his earlier  political “career” advancing a  radical anti-gun agenda such as a total ban on the manufacture, sale and possession of handguns,  and a ban on  common hunting rifle ammo.  He also opposed Right-to-carry laws, voted support for predatory lawsuits designed to bankrupt the firearm’s industry, and  supported a state bill that would have required citizens to get permission from the police department to purchase a firearm.

“Possession of arms by the people is the ultimate warrant that government governs only with the consent of the governed.”   anon

From 1994 to 2001 Obama was on the Board of Directors of the “anti-everything American” Joyce Foundation which just happens to be the largest funding source for radical anti-gun groups in the country.  During his time with the Foundation, Obama approved over $30 million in grants to fund anti-gun projects including funding of the Violence Policy Center whose singular goal is to rid America of private ownership of firearms.    In 2003 Obama voted to ban privately owned shotguns, target rifles and black powder rifles in Illinois.  And, in 2004 Obama voted against legislation that would have protected homeowners from prosecution when they used a firearm to stop a home invasion.

“The problem that progressives have on gun issues has far less to do with the typical policies they espouse than the rhetoric they employ.”  The Third Way

“It’s critical that progressives recognize that only an aggressive outreach strategy to gun owners will ensure that your opponent’s message about your gun record does not define your candidacy.”  The Third Way

The Third Way propaganda manual, coauthored by Jim Kessler, “Taking Back the Second Amendment“, is built around a  central public opinion that voters overwhelmingly support the 2nd Amendment, and therefore progressives must learn how to dance around the question without committing oneself to supporting the amendment, allowing their voting record to define them,  and hiding their true agenda of gun control.   Double talk is an affective weapon recommended by the Third Way and and used often by Obama.    “I take a back set to no one in support of 2nd Amendment rights, but I also support. . .continuing the ban on assault weapons. . .Out gun rights come with the responsibility to keep them out of the hands of criminals, terrorists and children.”  Or, “As President, I will uphold the constitutional rights of law-abiding gun owners, hunters, and sportsmen. . .We can work together to enact common-sense laws. . .so that guns do not fall into the hands of terrorists or criminals.”

For a complete look at Obama’s anti-gun policies prior to his 2008 election, read “Obama’s Gun-Restriction Policy Handbook”.

For the last three years, Obama and his sidekick “loose-lips Biden” have been playing voters  for fools.  While loose-lips has dropped the veil several times, Obama and the drive-by media have managed to keep the talk on gun control pretty close to the vest.  When Eric Holder departed from the company line and said “As president Obama indicated during the campaign, there are just a few gun related changes that we would like ot make, and among them would be to re-institute the ban on the sale of assault weapons” he was brought under control very quickly.

“Let us hope our weapons are never needed – but do not forget what the common people knew when they demanded the Bill of Rights – An armed citizenry is the first defense, the best defense, and the final defense against tyranny.  If guns are outlawed, only the government will have guns, only the police, the secret police, the military – the hired servants of our rulers.”   Edward Abby

There have been a few blimps on the radar as to this administration’s true agenda.

Secretary of State, Hillary Clinton, working in the shadows with the United Nations has all but signed-off on proposals for an International Arms Treaty that is in direct conflict with our Constitution.   If the treaty is ratified, I wouldn’t hold my breath waiting for the Supreme Court to help.

Two Supreme Court cases on the 2nd Amendment – Heller and McDonald – regarding gun bans in D.C. and Chicago,  showed that the 4 dissenting Justices concluded that the 2nd Amendment did not guarantee an individual right to bear arms or the right to protect ourselves, our families and our property.  In the McDonald case, the same 4 dissenting Justices wanted to over turn the prior Heller decision.

Then there is the “Fast and Furious” operation that the Justice Department and BATF used to  illegally sell  firearms to Mexican Drug Cartels in an attempt to falsely prove “90% of  the guns recovered in Mexico” were purchased from gun shops in the U.S.   To be fair, they probably were – they just were purchased under the direction of the Justice Department and BATF.

Even with the year long continuing  investigation of Fast and Furious, Obama used an Executive Order to impose gun registration in 4 southwestern states without  legal authority to do so under the Constitution.  According to Jay Carney, White House Press Secretary, Obama is only issuing a “common sense measure to improve America’s safety and security while fully respecting 2nd Amendment Rights.”    Looks like all those employed at the White House are well versed in “Taking Back the 2nd Amendment” progressive double talk garbage.

Obama’s history in support of strict gun control measures would make it difficult for an honest man to claim he supports the 2nd Amendment.  But, we are not dealing with honest – we are dealing with a committed Socialist who will use any means at his disposal to further his agenda.   Obama has perfected the ability to spout  garbage out of  both sides of his mouth while attempting to hiding his true character and agenda from the voters.

From his previous voting record and rhetoric,  it is easy to determine  that his idea of common sense regulation is confiscation of all firearms.  Obama and his cronies on Capital Hill  have quietly attacked our 2nd Amendment Rights by regulation through his Czars, through Executive Order,  by appointments to the Supreme Court, and the use of the Justice Department and the BATF.

“One of the ordinary modes by which tyrants accomplish their purpose without resistance, is, by disarming the people and making it an offense to keep arms.”  Supreme Court Justice, Joseph Story, 1840

← Obama Man Can
Isn’t It Racist To Judge A Person By The Color of His Skin? →