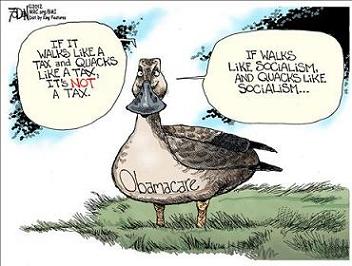 Is it possible that Chief Justice Roberts made the right long-term decision with ObamaCare?

Justice Roberts actually ruled that the mandate, relative to the commerce clause, which Obama used as justification to pass ObamaCare,  was unconstitutional.  His ruling means that Congress can not EVER compel American citizens to purchase anything.

Because Congress doesn’t have the ability to mandate, it must rely on its power to tax and therefore, the mechanism that funds ObamaCare is a tax.  This is critical.  ObamaCare is funded by tax dollars and now Democrats must defend this major tax increase to justify ObamaCare.

Justice Roberts has reasserted State’s rights, by ruling that the federal government can not blackmail state’s into accepting ObamaCare.  If a state takes federal money, the Feds can tell them how to run a program but, if state’s refuse money, the federal government can not penalize the state by yanking other funding.  Therefore, states can decline to participate in ObamaCare without penalty.

Ultimately, Roberts supported states rights by limiting the federal government’s coercive abilities.  He ruled that the government can not force the people to purchase products or services under the commerce clause and he forced liberals to have to come clean and admit that ObamaCare is funded by tax increases.

While he may not have guaranteed Romney a win, he certainly did more than his part.  And, he did this without creating a civil war or having bricks thrown threw his windshield.