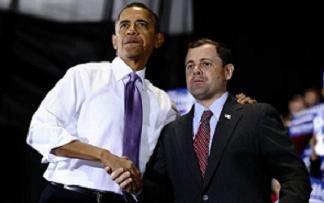 Tom Perriello, the former Virginia 5th District Congressman,   now President of The Center For American Progress Action, a grass roots far left organization affiliated with the Progressive movement,  sent out an email praising the Supreme Court’s decision on ObamaCare.   One of the many reasons Perriello lost his bid for re-election was his support and vote for ObamaCare after promising voters in the 5th District that, due to his deep abiding faith,  he would not support ObamaCare if it included abortion coverage.

Tom is adamant that the “victory” at the Supreme Court belongs to all of us.  “Today the American people won, and the U.S. Constitution once again survived the attacks of Confederationists.”  What the American people won is the right to massive tax increases,  added government bureaucracy between doctor and patient, and a “death panel” to decide what coverage you are entitled to and even you will be allowed to receive medical care. Like most of the Socialist radicals in this county, Perriello has no idea what the Constitution even means.

I will not insult your intelligence by quoting the entire email.  You can read it for yourself here.

What I would like to pass along is a response to Mr. Perriello from Bradford Archer, Chairman, Franklin County Republican Committee

Note that Perriello is concerned about freedom from the confederationists.  I find this to be an interesting moniker for those of us who still understand what the Constitution is supposed to be all about.  Our country is a confederation of states who each choose to be a part of a collective of states called the United States of America.  Each state is sovereign and has elected to be a part of this confederation.

The fact that Tom Terrific calls those of us who believe in this concept “confederationists” insults me and my constitutional sensibilities.  I am sure it offends you as well.  We can now see, in no uncertain terms, the assault on state’s rights in this letter.  Perriello and his ilk have sought to destroy the very nature of this country’s founding by consolidating power into a central federal government.

Through the health care legislation, the federal government has usurped the sovereignty of each of the 50 states and has mandated that the citizens of each of these states must abide by the wishes of those who would be masters of the people.

There are many who believe that Chief Justice Roberts succumbed to the pressures from the left and caved in on the health care issue.  I don’t quite see it that way.  I believe that Justice Roberts has determined that it is put up or shut up time for “We The People”.  Rather than having a couple of Justices determine this law to be just, sound, and considered to be good legislation, I believe that Justice Roberts has put the decision in the hands of the people.  It will be through our efforts and those in neighboring communities to get out the vote, register new voters, and mobilize and energize the voters to elect those Representatives that will vote to repeal this horrid  piece of legislation.

While we can’t control what happens in neighboring counties or state, we can control our efforts within Franklin County.  As Everett Edward Hale stated in the halls of Congress: “I am only one, but I am one.  That which I can do, I ought to do and by the  grace of God I will do”.

From now until election day, let this be our mantra as we work to get Mitt Romney, George Allen and Robert Hurt elected.  Then “We The People” will have the final decision on this health care legislation.

I agree with Mr. Archer, I think Justice Roberts saw through the ObamaCare lies  –  it is a tax and a shamless play for expanding government into our private lives.  ObamaCare will destroy our health care system  –  which, by the way, is the very system that liberals claim they want to fix.

← 75% of ObamaCare Taxes Will Be Paid By The Middleclass
Did Justice Roberts Stick It To Liberals? →