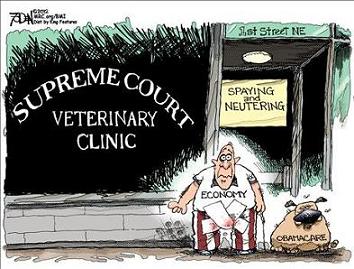 There is a delusion among pro-socialist in America that we are the richest country in the world and as such it is absurd that the establishment does not pay for our health care.  They constantly rant about Canadian health care and its record of universal treatment.  The problem is, they ignore the details.

Officially, our economy has already broken the 100% debt to GDP threshold.  Unofficially, but more accurate, when you include intergovernmental debt and debt obligations, the national debt actually  exceeds $120 trillion.  Add to this the projected cost of ObamaCare at $17 trillion in long-term unfunded obligations and what you get is bankruptcy, making the debate about ObamaCare moot.

The government claims they are going to pay for ObamaCare with taxes.  How do you raise taxes on a populace that is growing more destitute every year?  How do you take money from people if they do not have it?

Taxation would have to expand as fast or actually faster than the rising cost of health care expenditures and since that is impossible, the end results would be  the U.N.’s favorite subject –  population reduction and rejection of care for those society deems no longer viable.  When you institutionalize health and life under government bureaucracy, you must also invariably institutionalize death.  Population and life suddenly becomes a  numbers issue to the state, rather than a moral issue.

What most Americans don’t seem to get is that government is nothing more than  a tool used by one group or another to implement a particular agenda.    And those that lean toward Socialism  as a Utopian ideology don’t seem to understand  that no matter what strategies they devise, they will never have control because the establishment does not care about them, or you.  The establishment does not think of what it can give; it thinks about what it can take.   Socialism, in the minds of the elite is just a con game that allows them to curry the favor of the useful idiots.

Other powers are at work in this world, powers that have the ability to play both sides of the political spectrum.  The monied elite have been wielding the false left/right paradigm for centuries, and to great effect.  Whether socialism or corporatism prevails, the elite will remain the  victors, at the expense of the peasant.

A country that feels the need to socialize has already failed culturally.  Acceptance of Socialism is an  admission that it is unwilling or unable to take responsibility for its own prosperity.  If a country cannot function in a healthy economic manner without the  government creating an artificial and precarious balance using fiat stimulus and overt taxation, then the people of that country are not even remotely independent or self-sufficient.

Only a nation filled with pathetic, overgrown children would actually need government to enforce mandatory charity, welfare, health care, etc.  A truly healthy society supported by self-sustainable individuals would not beg to be parented by government.

If a country is so unbalanced as to stoop to socialism, then its ailments already extend far beyond anything government could ever hope to cure.  Socialism is admitting defeat. It is a waving of the white flag and the trading of culture’s liberty for the illusion of fiscal security.  It is the act of an adolescent and native populace groveling for an allowance.

One only has to look at the record of a socialized Europe to understand what America will become.   More than half of the European Union have already reached debt to GDP well beyond the limit required to retain membership.  Several countries, including Britain, France, Spain, Italy, Portugal and Greece are in the midst of severe debt crises.  The euro is on the verge of disintegration.  Central bankers will no doubt blame the European countries insistence on maintaining sovereign control over their finances as the reason for failure.  But it isn’t sovereignty that strangled the EU, it was the ridiculous supranational status that  created a state of interdependency that weakened every member nation to the point of disaster.  It’s like dominos – when one falls, they all fall.

Anyone considering socialism as a viable option for America needs to understand that for Socialism to actually work would require financial discipline and a vast amount of savings.  Money is  an illusion of wealth that can be printed from thin air.  Savings, on the other hand, are an actual concrete storage of real capital, an ongoing surplus of manufacturing and production capability resulting in the stockpiling of working credit and ample employment.

Most of the EU countries do not have savings and never did.  They have operated for decades on a loss.  They have never been able to live with the direct and indirect investments of outside players and because of this are unable to keep up with the concepts of socialism and have been buried under the crushing debts generated by entitlement programs.

The only thing that has stayed the tide of a full-blown macro-implosion of the U.S. is the world reserve status of our currency.  The dollar is all we have left and we can’t count on it for much longer.    With China and Japan, our largest foreign debt holders, quietly forming bilateral trade agreements that cut out the use of our dollar, it will not be long before its status as a world reserve will disappear.  When that happens – we are on our own.   The Federal Reserve can print all the money it wants but if other countries no longer need the dollar to facilitate cross border trade, all the U.S. will end up with is hyperinflation or stagflation.

ObamaCare only expedites this process by generating even more liability that we can not overcome.  We are already broke – in the red – in the hole – insolvent!  Therefore, the debate over ObamaCare is pointless.  We have no money.  It is mathematically and economically impossible to implement it.

Read: “The Socialization of America Is Economically Impossible”  by Brandon Smith