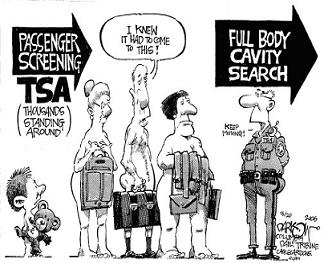 The Government Accounting Office (GAO) has reported that the Transportation Security Administration (TSA), the agency that employs all those airport gropers,  had approved  flight training for  twenty-five illegal aliens.  And, if that isn’t bad enough, the Boston flight school they approved them to attend was owned by an illegal alien.  And, there is more.  TSA, DHS, nor ICE found this out until after  a Boston  police officer, making a routine traffic stop,  discovered the owner of the flight school was in the country illegally.

Rep. Mike Rogers, -AL, chairman of the House Homeland Security Subcommittee on Transportation Security said he found the GAO’s report amazing.  “We have cancer patients, Iraq War veterans and Nobel Prize winners all forced to undergo rigorous security checks before getting on an airplane and at the same time, ten years after 9/1, there are foreign nationals in the United States trained to fly just like Mohammed Atta and the other 9/11 hijackers did, and not all of them are necessarily getting a security background check.”

I don’t find it amazing at all.   DHS, under the tutelage of Big Sis, has been too busy waging a  terrorist campaign against everyday American citizens,  while allowing illegal aliens to run rough shod over American laws, to notice that illegal aliens are still  learning to fly planes.   ICE is not allowed to do their job thanks in part to Obama, the Justice (and I use that term loosely) Department, and DHS.  And,  TSA is too busy overseeing the strip search of senior citizens, the disabled and children to care about possible terrorists.

Under the “Alien Flight Student Program” administered by DHS,  illegal aliens or foreign nationals are supposed to be subjected to a TSA security threat assessment prior to receiving flight training to determine whether they pose a security threat.    Apparently no one did their job because  the  illegal alien who owned the Massachusetts flight school had not undergone a required TSA security threat assessment and had not applied to TSA or been approved for flight training but he somehow  managed to hold two Federal Aviation Administration (FAA) pilot licenses.

In response to the arrest of the Boston flight school trainer, ICE launched an investigation and discovered another twenty-five foreign nationals had applied to TSA and received approval for flight training.  Of the twenty-five, 8 who received approval were in the country illegally; 3 of which had already received their FAA airman certificates (licenses); 2 held FAA private pilot licenses and 1 had an FAA commercial pilot license.  Seventeen of the twenty-five were in “overstay” status.

The owner of the flight school who was an illegal alien had obtained a certified Airline Transport Pilot licenses and was a Certified Flight Instructor.

GAO said that based on their names, none of the twenty-five illegal aliens appeared to be from Muslim countries because they had Latin American names.  That settles it – none of them were potential terrorists.  Have they never heard of people changing their name or the fact that terrorists organizations are operating throughout Latin American because it is easier for them to blend in?

The GAO also found that from January 2006 through September 2011, 25,599 foreign nationals had applied to TSA for FAA airman certificates indicating they had completed flight training, many of which had received training without being vetted by TSA.

Thank God we have the Obama Administration to keep us safe!

← Don’t Eat Your Dog: A Moral Case For Free Enterprise
If Anyone’s a Criminal it’s Obama →