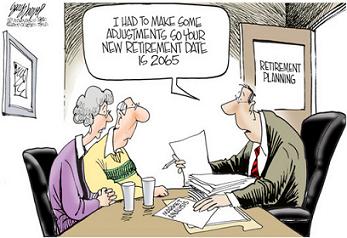 Obama, trolling for votes,  spent months touring college campuses touting his plan to keep student interest rates for federally backed loans at 3.4%.   It worked – at the least the freeze on student loans – the votes, we’ll have to wait until November to see if his ruse worked!    Congress slipped the freeze  into the massive Transportation Bill Obama  signed this month.

Parents and students shouldn’t get all that excited.  Obama’s only concern is in securing your vote this year – next August,  if Obama has his way, federally backed student loans will carry interest rates of 6.8%.    The whole time Obama was out pandering for votes, I never heard one person explain, nor did the drive-by media ask,  how we were going to pay for it?

Thanks to Nathan Haden at the New York Post  we now know where that money will come from.    The government is raiding its pension-guarantee fund to the tune of $6 billion, even though the fund is already running a deficit of $26 billion.

In an attempt to buy a few business votes, the bill also lowers accounting standards for pension funds, letting companies  contribute even less money than before while forecasting the same future return.  In layman’s terms – Obama and Congress are pretending that a system that is already broke will magically prosper in the future with even less direct investments.

Unions who normally would balk at the this  – are actually throwing workers under the bus by supporting Obama’s re-election scheme.  But then, we are only talking about 15% of future retirees who have defined pension plans.  And, what is 15% in the grand scheme of things?  Not much to Obama and the unions!

So what have we gained by his vote buying hocus-pocus scam?  Student debt has reached an all time high of more than $28,000 per graduating student.  A one year freeze isn’t going to solve that problem and will help destroy an already underfunded pension system.

In essence Obama and Congress are stealing from seniors tomorrow to achieve a politically expedient goal today.

← In Liberal Colorado, It’s Against The Law To Stop A Massacre
Ponzi Economics →