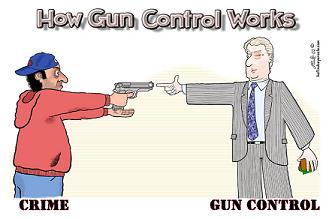 According to current Colorado law, it is illegal to carry a concealed weapon in all of the following cities:  Aurora, Boulder, Broomfield, Colorado Springs, Denver, Englewood, Lakewood, Littleton, Longmont, Northglenn, Pueblo, Thornton, Westminister, and WheatRidge.  It is also illegal to  own a large number of firearms in Thornton and Lafayette.

In Aurora, it is illegal to even carry a firearm in a vehicle.   You can check out individual city ordinances here.

So not only did James Holmes commit mass murder but he broke all those gun control measures that left honest citizens defenseless.   Instead of being able to defend themselves, his victims died because no one could shoot back.   A disarmed public is helpless against crazed shooters!

This is exactly the scenario that gun control advocates like Obama, Hillary, Bloomberg, and the Brady Bunch. along with the U.N. and their Socialist, Communist, Terrorists cohorts want to force on the entire world.

The Bill of Rights guarantees the right to bear arms so tyranny can’t transform this country into something like Russia under Stalin who murdered 30 million people, or China under Mao, or in Cambodia after the Vietnam war where more than 1 million people were murdered.  Once the government takes our weapons, criminals and the government can and will usurp power over law abiding citizens.  It happened during Katrina when law enforcement confiscated weapons leaving citizens to face gang looting without any protection.

To  disprove Socialist claims that gun control laws will make us safer, just look at Chicago, with its very restrictive gun control laws.    Some 2,000 U.S. troops died in Afghanistan since 2001 while in Chicago,  5,000 people have been killed by gun fire during the same period.  Guess those criminals forgot to read the law!  Now look at Kennesaw, Georgia, voted as one of the nation’s 10 best towns for families by Family Circle magazine.  In Kennesaw,  gun ownership is mandatory.  There has been only 4 murders since the mandatory law was passed.

By definition criminals do not abide by laws.  None of the gun control measures in Colorado stopped Holmes.  The only real impact of gun disarmament is to create yet more victims.

The average police response time is 6 minutes plus, depending on where you live.  In the country response time could be 30 minutes or more.  It took Holmes 2 minutes to carry out his massacre in Aurora.  A typical concealed carry holder can draw, aim and shoot back in less than 5 seconds.   YOU DO THE MATH!

If it were one of my family that was murder –  I’d be filing a lawsuit against the City of Aurora because their insane gun control laws are as much to blame for the deaths as the man who pulled the trigger.

1 comment for “In Liberal Colorado, It’s Against The Law To Stop A Massacre”