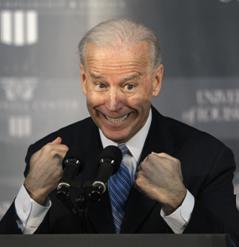 Isn’t it  bad enough that we have to listen to Obama and Biden  whine about how the rich aren’t paying their fair share and are hurting middle class Americans, especially since we know it is a lie?

According to Obama’s calculation, more tax revenue means more bankrupt  “green energy” projects; more  payback he can hand out to his supporters and even more  extensive and expensive vacations he and Michelle can take.

I have always just assumed that Biden was mimicking his mentor.  But, it turns out that Biden is almost as  bad as Obama about wasting  those middle class tax dollars.

While “Sheriff” Joe was helping Obama root out all that wasteful spending (by anyone other than Obama), Joe is  feverishly feeding at the same trough.

While millions of Americans are worried about finding a job, putting food on the table for their families or being evicted from their homes, Sheriff Joe takes the “Marine Two” helicopter every Friday  from the vice president’s residence to Joint Base Andrews in Maryland to hop on Air Force Two to fly to Delaware and then reverses the move to get back to Washington. During warm weather, Biden regularly returns from Delaware to Andrews  Saturday to play golf with Obama and then heads back to Delaware before flying back to  Washington on Sunday –  all of this at taxpayer’s expense.

The cost to fly Air Force Two is $22,000 an hour – so each half hour trip to or from Delaware costs us about $12,500.  Each golf game adds another  $22,000.  The annual cost to taxpayers for  Biden’s weekend trips is well over $1 million.  But the story doesn’t end there.  The Secret Service has to rent more than 20 condominiums, at taxpayer expense,  in Delaware for agents guarding Sheriff Joe.

Don’t think for one minute that Obama isn’t aware of Biden fleecing taxpayers.  But, when you compare the $1 million yearly expense for Joe to go home every weekend to the lavish vacations Obama and Michelle take, it’s like – petty cash!

Obama’s  Hawaiian  vacation last December cost taxpayers slightly over $4 million when you  add in the cost of the secret service agents, the Marine team travel and housing and the cargo plane to fly the presidential helicopter and limo, along with the added  cost to send Michelle over separately.

Since assuming the throne,  the royal family has taken 16 vacations –  In 2009 they took trips to Martha’s Vineyard, Yellowstone and the Grand Canyon and of course, Hawaii. In 2010  Michelle and her daughter took a mother/daughter vacation to Spain and to New York City for spring break while Obama headed for Chicago; vacations at Mount Desert Island, Maine,  Martha’s Vineyard,  Panama City and of course, Hawaii.  In 2011  Michelle treated the girls to a ski trip at Vale and then took her mother and daughters to South Africa and Botswana, then on a family vacation to Martha’s Vineyard and, of course, a trip to Hawaii.  So far this year Michelle has taken the girls on another ski trip to Aspen that cost taxpayers another $83,183.

Sheriff Joe portrays himself as a regular Joe, a product of a working class family who takes on millionaires and Republicans who are “out of touch with middle-class Americans.”  But most middle class Americans would love to be in his shoes.  While Biden and his wife Jill report assets of  only between $239,000 and $866,000,  their home in Wilmington is valued to be worth $2.86 million and I doubt seriously that they are in any danger of losing it.  In 2011, Biden and his wife reported adjusted gross income of $379,000 which is  well above the threshold Obama places as the cut-off between the rich and the peasants.

Obama calls for “shared sacrifice” and a balanced approach to reducing our debt.  Why does the sacrifice have to be from the bottom up – isn’t it time for Obama and Biden to set the example?

← Romney Support of Israel; Warns Iran
Gay Is Not The New Black →