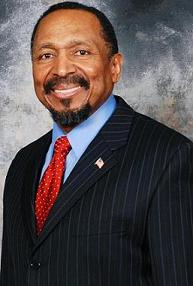 Bishop E. W. Jackson, a veteran of the Marine Corps, a  Harvard Law School and Harvard Divinity School graduate is calling for Christians to leave the Democratic Party over what he describes as a “cult like devotion” to abortion and a “rejection” of the traditional family.

Bishop Jackson established the headquarters for his Exodus Faith Ministries in Chesapeake, Virginia, where he founded “Youth With A Destiny,” a nonprofit organization dedicated to helping youth avoid gangs, drugs and violence through faith, education and positive activities.

Jackson also founded STAND (Staying True to America), a national grassroots organization dedicated to preserving our Judeo-Christian history and values; saving the unborn from the slaughter of abortion; maintaining marriage as a sacred union between one man and one woman; reversing our country’s slide into secular atheism, anti-Semitism and anti-Christian bigotry; protecting the military and Israel’s right to exist and be secure within its borders.

Jackson says that Democrats’ enslavement of some Americans, most notably black Americans, is the modern day equivalent of slavery and his focus is to lead an exodus, similar to what Moses did in the Old Testament.  “Clearly, the Democratic Party is the anti-Christian Party in this nation.  They reject the Bible, what Bible believing Christians embrace, and they encourage the growth of non-traditional family.”

As an example, Bishop Jackson says that  Gabrielle Douglas, the 16 year old sensation who won the all around gold medal in gymnastics,  tweeted a verse from Romans 12:19: “Beloved, never avenge yourselves, but leave it to the wrath of God, for it is written, ‘Vengeance is mine, I will repay, says the Lord.”  Apparently it didn’t play well with some Democratic activists.  Mary Elizabeth Williams who writes for the progressive on-line magazine Salon.com wrote that “I’ve often wondered what it is about Christians like Douglas that unnerves me so. . .Douglas and her ilk, seem to espouse a faith based on what is commonly referred to as The God of Parking Spaces. ”

Jackson also pointed to the Democratic Party’s support of organizations such as Planned Parenthood, the ACLU, Freedom From Religion Foundation and even the NAACP as examples of how far the party has moved away from Christians, and in particular black Christians.

“What was once an historic and honorable civil rights organization [NAACP] is now nothing other than a left wing apparatus of the Democratic Party. I will say that some of the local chapters still advance civil rights, but in my opinion the national chapter no longer cares for the average black person.  That is a shame too.”

“There is a concerted effort to do away with all symbols of our Judeo-Christian Culture, to deny our right of conscience is matters of faith and to attack Christians, Catholics and Protestants, who dare to speak openly of their faith.  However, there is a silver lining in all of this.  This may be an opportunity for an historic shift in the cultural and political direction of our country if Christians of all races will unite in rejecting the godless left agenda of the Democratic Party.”

I can’t help but wonder what bible Kennedy reads that espouses the  Liberal Word that they wish Christ had taught rather than the actual Word of God.

Christians should thank God for Pastors like Bishop Jackson, Keith Ratliff, and William Owen, who refuse to worship at the alter of political correctness.  We need thousands more like-minded Christians and outspoken Pastors to stand with these men of God.