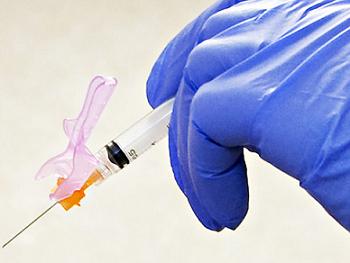 In 2005, Peter Doshi published a report in the British Medical Journal (online) in which he said “U.S. data on influenza deaths are a mess.”

According to Doshi, the Center for Disease Control and Prevention (CDC) uses a manufactured number of annual deaths from seasonal flu in order to scare the masses into accepting a harmful chemical cocktail, all to benefit Big Pharma and the medical community.   His research indicates that CDC uses the term “flu death” and “flu associated death” interchangeably.  There are significant statistical incompatibilities between official estimates and national vital statistics data.  The CDC’s numbers are a combination of influenza and pneumonia deaths.

David Rosenthal, director of Harvard University Health Services said “people don’t necessarily die, per se, of the flu virus – the viraemia.  What they die of is a secondary pneumonia.  So many of these pneumonias are not viral pneumonias but secondary.”

Death from flu is rare.  The vast majority of the so-called flu deaths are from bacterial pneumonia, a potential complication of the flu for those with weak or compromised immune systems.  One shocking statistics you won’t hear about – before the CDC advocated flu vaccines for children as young as 6 months , the number of children dying from the flu was low and on the decline.  When flu vaccines were begun in 2003, the number of deaths skyrocketed.

Doshi found that in 2001, influenza and pneumonia caused 62,034 deaths but of that number only 257 were attributed to the flu and in the 257 cases blamed on the flu, the flu virus was identified in only 18.  Between 1979 and 2001, CDC data only showed an average of 1,248 flu deaths per year which is obviously far less than the 36,000 figure they use to frighten people into getting vaccinated.

The CDC also does not tell us that seasonal flu vaccines are ineffective 99% of the time and in many cases do more harm than good.   Studies have shown that reliable evidence on vaccines are very thin and that vaccines do not reduce transmission of the flu.

So why is the CDC advocating seasonal flu shots?   The CDC, as well as doctors and pharmacies get kickbacks on the vaccines and drugs they administer and in most cases do not divulge what harmful additives are found in the vaccines or their side effects.

When suspected flu strains are selected for vaccines, they are cultivated in chick embryos for several weeks before being inactivated by formaldehyde and then preserved with thimerosal.

Aluminum is added to vaccines to act as an immune adjuvant which enhances (boosts)  the immune response.  Aluminum has been linked to Parkinson’s disease, ALS and Alzheimer’s disease.  Researchers have also found that vaccinations with aluminum  could trigger the cascade of immunological events associated with autoimmune conditions, including chronic fatigue syndrome and macrophagic myofasciitis, a condition that resembles multiple sclerosis.  A Pediatrics study found that Aluminum is now implicated as interfering with a variety of cellular and metabolic processes in the nervous system and in other tissues.  Babies who follow the recommended vaccination schedule, are injected with nearly 5 mg of Aluminum by the time they are 18 months old.  The FDC considers 0.85 safe.

Formaldehyde is used to kill and preserve bacterial toxins and make viruses unable to replicate (reproduce).  It is listed as a carcinogen by government scientists and warnings are issued about exposure from fumes emanating from plywood and particle board and workers exposed to it in funeral homes and hair salons.  Formaldehyde and its chemical kin, formalin, is present in most vaccines.  The Environmental Defense Fund ranks Formaldehyde as one of the most hazardous compounds on ecosystems and human health.  Known side effects include eye, nasal, throat and pulmonary irritation, anaemia, blindness, bronchial spasms, Bronchitis, Cardiac impairment, central nervous system depression, palpitations and arrhythmia’s, loss of memory, loss of taste, coma, convulsions, death, etc.

Thimerosal is a preservative that allows vaccine makers to distribute vaccines in multi-dose vials.  It contains 49.6% mercury by weight.  Mercury is classified as a hazardous material because it is the second most toxic element on earth.   Mercury accumulates in the brain and has been linked to cardiovascular disease, autism, seizures, mental retardation, hyperactivity, dyslexia and other nervous system disorders, burning feeling in limbs, memory loss, kidney failure, multiple sclerosis, lupus, depression, bipolar disorder, etc.  Evening seemingly small amounts have major deadly consequences.

2-phenoxy-ethanol is used as a stablizer in vaccines and in some vaccines as a replacement for Thimerosal.  It is used in dyes, inks, germicides and cosmetics as well as vaccines.  It is harmful if swallowed, inhaled or absorbed through the skin and may cause reproductive defects.

Whether or not you take a flu shot is up to you.  If you have a compromised immune system, you have to weigh the benefit against the possible side effects.  But for those that are healthy, why in the world would you want to deliberately put aluminum, formaldehyde and mercury into  your body?