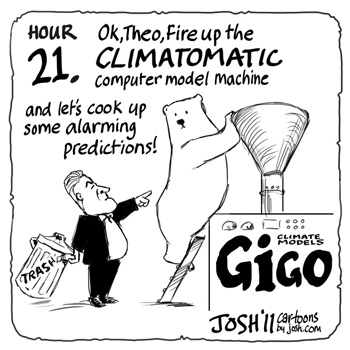 Poor, poor Al Gore.  He doesn’t get any respect – or publicity  unless like Al Sharpton he creates  his own.

Using the far-left mantra of “never let a crisis go to waste,”  Big Al jumped in with his “sky is falling” theory  on Hurricane Sandy.  “Hurricane Sandy is a disturbing sign of things to come.  We must heed this warning and act quickly to solve the climate crisis.  Dirty energy makes dirty weather.”

NOAA’s Martin Hoerling said that the cause “is likely little more than the coincidental alignment of a tropical storm with an extra-tropical storm.  Both frequent the Atlantic in October – nothing unusual about that.  As to underlying causes, neither the frequency of tropical or extra-tropical cyclones over the North Atlantic are projected to change.”

Professor Pielke, Jr says that “we’ve done long term trends with respect to hurricane damage in the U.S. and it’s very safe to say that regardless of how Sandy plays out, there’s a century long time series with no trend in it. . .”

German Meteorological Expert Dr. Karsten Brandt said “there’s no indication or evidence showing there is an increase in storm activity.  The data doesn’t show it.  Luckily we don’t need to worry much about increasing storms in the future.”

Chris Landsea, a hurricane expert said that hurricanes should not be used as a poster representing a human influence on climate.  “any connection between [warming and hurricanes] can be easily shown to be incorrect.”

The North Atlantic sea surface temperatures have generally been above normal since 1995 due to a natural feature called Atlantic Multidecadal Oscillation.  The strengthening of “Sandy” was attributable, in large measure, to baroclinic forcing – the collision of very warm air from the tropics with a very cold air front out of Canada.

I guess Big Al neglected  to read the 2012 data that said global warming ended 16 years ago.  He’s been so, so busy taking care of that mansion that uses enough electricity  to power a small town.

Isn’t it bad enough that we have a  President who is doing everything he can to milk “Sandy” before the election by pretending that he really cares about the peasants?  He stood up in front of the cameras and assured us that “when America is in need. . .we leave nobody behind.”  What a beautiful sentiment!  But I have one question – how come that sentiment didn’t apply to the pleas for assistance from Americans under attack in Lybia and with help reportedly close by? Was it because there were no media close by as you watched our citizens die?