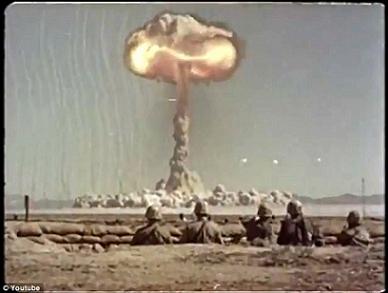 American veterans,  suing the military and CIA for allegedly using them as guinea pigs in chemical and biological tests from 1922 to the present, won the right to pursue the case as a class action, a federal judge ruled late September.

The lawsuit alleges that from World War I to about 1975, “soldier volunteers” were experimentally exposed to a wide range of chemical agents for research atomic, biological and chemical warfare.

The claims include constitutional violations and violation of the Administrative Procedures Act.

Although a 1953 memorandum by the Army required voluntary consent from soldiers and that subjects be informed of potential dangers, the suit alleges “all volunteers participated without giving informed consent because the full risks of the experiments were not fully disclosed,” Wilken wrote.

The lawsuit was filed in 2009 by Vietnam Veterans of American, Swords to Plowshares and a host of individuals.  It claims the soldiers were given more than 250 drugs and as potentially as many as 400.  Along with deadly Sarin, they were allegedly exposed to amphetamines, barbiturates, mustard gas, phosgene gas, Thorazine and LSD.   The suit also includes an allegation that the far flung testing included experiments with septal electrodes implanted to test the ability to directly control human behavior.

The Department of Defense argues that it is “unaware of any general long-term health effects associated with the chemical and biological testing programs,” Wilken wrote.  “But that is contradicted by the department’s own documents,”  concluding that plaintiffs may pursue claims for failure to provide notice to test subjects and the right to pursue claims for medical care to test subjects.

In 2002, Congress passed the National Defense Authorization Act, which required the Secretary of Defense to work to identify projects or tests conducted by the military that may have exposed armed forces to chemical or biological agents.

According to plaintiffs, test subjects were compelled to sign secrecy agreements and face military discipline if they violated the lifetime oath but the CIA has said it cannot locate records and denied that the secrecy oaths exist.  But that did not deter Judge Wilken.  She said: “The CIA’s self-serving statement that it cannot locate records of secrecy oaths that it directly administered, and thus does not believe that such oaths were made, does not establish this fact or that other secrecy oaths cannot be traced fairly to the CIA,  and plaintiffs may include the CIA in their claims regarding the oaths.”

The Department of Veterans Affairs has denied between 97 and 99 percent of all disability or death claims arising out of the alleged exposures, according to the plaintiff’s law firm, Morrison & Foerster.     The veterans do not seek monetary damages.  Instead, they are asking that the all government agencies involved  notify participants of the known health impacts of the substances they received, mandate health care for those who have suffered diseases and guarantee due process for veterans denied benefits.

The class action will include, “All current or former members of the armed forces, or in the case of deceased members, the personal representatives of their estates, who, while serving in the armed forces, were test subjects in any human Testing Program that was sponsored, overseen, directed, funded, and/or conducted by the Department of Defense or any branch thereof, including but not limited to the Department of the Army and the Department of the Navy, and/or the Central Intelligence Agency, between the inception of the Testing Programs in approximately 1922 and the present.

‘Testing Program’ refers to a program in which any person was exposed to a chemical or biological substance for the purpose of studying or observing the effects of such exposure,” according to the 59-page order.   Up to 100,000 veterans may fall into this category, according to estimates by Morrison & Foerster.

As a side note – not all human testing was on the military.