As I reported last week, now that Lt. Governor Bill Bolling has dropped out of the campaign, Attorney General Ken Cuccinelli  is the lone Republican seeking the Virginia Governor’s office.  Meet his competition. 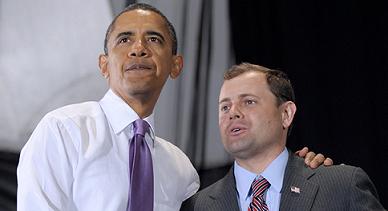 Tom Perriello is reportedly considering a bid for Virginia’s governor’s seat in 2013, according to sources close to the former Democratic congressman.

Perriello currently  leads the Washington, D.C.-based Center for American Progress Action Fund, the advocacy arm of the progressive think tank that works arm and arm with the Obama administration in an attempt to annihilate opposition.  Perriello campaigned with President Barack Obama during the 2012 election.

Perriello  served one term in Virginia’s 5th congressional district, barely beating then-incumbent Rep. Virgil Goode (R-Va.) in a long-shot bid by just 727 votes.   On the campaign and in Congress, he was a “darling”  of the progressive community but that didn’t save him in  2010,  when he lost to Republican Robert Hurt partly because of his lying promise not to vote for ObamaCare if it included abortion,

For those not  familiar with the Center for American Progress (CAP),  the prime mover behind their  creation was the billionaire philanthropist George Soros.  On May 3, 2004, CAP helped launch David Brock‘s Media Matters for America to serve as a “watchdog” organization monitoring “rightwing” media for ethics violations and factual inaccuracies.  According to The New York Times, Brock conferred with Hillary Clinton, Senator Tom Daschle (a Distinguished Senior Fellow with CAP), and former U.S. Vice President Al Gore about Media Matters before embarking on the project.

CAP,  is  “an adjunct of the Democratic Party” that “manufactures talking points, spins the daily news, and does opposition research”—essentially “a nonprofit public relations firm.” Little, if anything, that CAP produces can be considered serious research. Its policy positions and recommendations are indistinguishable from those of the Democratic Party.  This is because so many of the Center’s senior staffers and Fellows are veterans of the Bill Clinton and Barack Obama administrations, and of the Democratic National Committee.

While Perriello considers, Terry McAuliffe has already announced that he will be running for governor next year.  The former Democratic National

Committee chair and  longtime aide to Bill and Hillary Clinton made his first run for the Virginia governor’s house in 2009.  He finished in second place during the Democratic Primary to state Sen. Creigh Deeds, a candidate who went on to lose to current Virginia Gov. Bob McConell by a landslide.

← Come To America: The Land Of Free Stuff
And Here’s the Truth →