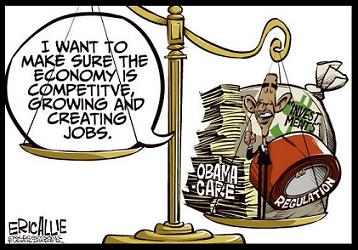 The federal government has closed out its fourth straight year of trillion-dollar-plus deficits, and the imperative to rein in spending has never been greater. Because all government spending gets paid for through either taxes or borrowing—both of which burden the economy—spending reduction is an essential condition for promoting economic growth.  For every $6.80 the federal government collected in taxes in 2012, it spent $10. Consequently, $3.20 out of every $10 spent was borrowed.

Fiscal year 2012 concluded with a $1.1 trillion deficit, marking the fourth year of trillion-dollar-plus deficits. Too much spending is the root cause of the federal government’s deep and sustained deficits.  At 23 percent of gross domestic product (GDP) in 2012 and on track to rise further, federal spending is growing at a dangerous pace.  Deficits will not fall below $760 billion (in inflation-adjusted dollars) over the next 10 years and have only been higher in the period immediately after World War II.

On September 4, the U.S. national debt hit the $16 trillion mark. We owe more on the national debt than the entire U.S. economy produced in goods and services in all of 2012.   Sixteen trillion dollar bills stacked one on top of the other would measure more than 1 million miles high, which would reach to the moon and back more than twice.

On January 30, the federal government raised its debt limit from a staggering $15.194 trillion to an even bigger $16.394 trillion.  This increase was the last one of three granted in the Budget Control Act of 2011, a result of that summer’s debt ceiling negotiations, which allowed for a total debt limit increase of $2.1 trillion.   Debt will reach nearly 90 percent of GDP by 2022. Levels this high damage the economy.  Debt will surge to 200 percent of GDP in 25 years. Debt at the end of Fiscal Year 2012 was twice its 2007 pre-recession and pre-stimulus level of 36 percent of GDP. Debt in 2022 will be 90 percent of GDP.  The highest level recorded previously—96.2 percent of GDP—was in 1947.

Much of 2012 was spent arguing over tax rates in the fiscal cliff debate while lawmakers ignored the much more dangerous looming fiscal crisis.  As large and as major a concern as federal budget deficits are today, they stand in the shadow of $48 trillion in long-term unfunded obligations in Social Security and Medicare. Even with President Obama’s originally proposed tax hikes in his budget, the federal debt would still rise by more than $7.7 trillion in the next 10 years.

According to the 2012 trustees report, Social Security spent $45 billion more in benefits in 2011 than it took in from its payroll tax. This deficit is in addition to a $49 billion gap in 2010 and an expected average annual gap of about $66 billion between 2012 and 2018. Social Security’s deficits will balloon yet further. After adjusting for inflation, annual deficits will reach $95 billion in 2020 and $318.7 billion in 2030 before the trust fund runs out in 2033 and a 25 percent across-the-board benefit cut occurs.

The last time both chambers of Congress agreed on a budget was on April 29, 2009. Since then, Congress has operated on a spend-as-you-go basis, characterized by incoherent, ad hoc budget procedures. The House passed budget resolutions each of the past two years, but the Senate failed to do its part.

After the Supreme Court decision on Obamacare, the Congressional Budget Office did an update of its scoring of the law. The result: Obamacare will spend $1.7 trillion over 10 years on its coverage expansion provisions alone, including a massive expansion of Medicaid and federal subsidies for the new health insurance exchanges. This means that Obamacare will increase federal health spending by 15 percent.  ObamaCare’s annual cost will exceed $100 billion by 2015.

In 1993, Social Security surpassed national defense as the largest federal spending category, and it remains first today.   In 2012 entitlements were nearly 62 percent of total spending while defense dropped to less than one-fifth (18.7 percent) of the budget.  Entitlement spending more than doubled over the past 20 years, growing by 110 percent after adjusting for inflation.   Entitlement spending will devour all tax revenues by 2048.   The top five biggest spending programs, in order, are:

According to Census Bureau data and Heritage Foundation calculations, 128.8 million people in America depend on a government program for basic (or not so basic) needs, such as rent, prescription drugs, and higher education.

Over the past 20 years, federal spending grew 71 percent faster than inflation.

Federal energy spending has increased steadily over the past decade with the government increasingly subsidizing activities like energy efficiency, energy supply, and technology commercialization. An unprecedented $42 billion was spent in 2009 as part of the stimulus, a nine-fold increase over the 2008 spending level.

In fiscal year 2012, Washington spent $88 billion on K–12 and vocational education, nearly triple the amount of just 10 years ago, after adjusting for inflation. Yet these huge infusions of federal funds to these state and local priorities have failed to improve educational performance.

Veterans spending, which totaled about $130 billion in fiscal year 2012, has more than doubled over the past 10 years. It includes programs such as income security, housing aid, education and training services, and veterans health care. Under President Obama’s Fiscal Year 2013 budget, this spending would rise 18.5 percent from 2012 to 2015 and surpass the $150 billion mark.

Transportation outlays have risen by $25 billion, or 33 percent, over the past 10 years. Budget authority, which takes several years to spend out, increased by $53 billion, or 61 percent over 10 years. Costly transit projects and low-value transportation enhancement programs for bicycle and horse trails and roadside transportation museums are fueling the increased spending, even though they do not improve mobility or relieve traffic congestion.

← Karma’s a B
Let The ObamaCare Tax Nightmare Begin →