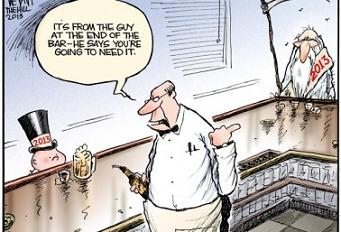 Welcome to 2013.  Today,  regardless of the outcome of fiscal cliff negotiations,   Americans will be hit with a $1 trillion Obamacare tax hike.    Plan accordingly.

The five major Obamacare taxes taking effect on January 1 are:

1)    The Obamacare Medical Device Tax:  Medical device manufacturers employ  409,000 people in 12,000 plants across the country. Obamacare imposes a new 2.3  percent excise tax on gross sales – even if the company does not earn a profit  in a given year.  In addition to killing small business jobs and impacting  research and development budgets, this will increase the cost of your health  care – making everything from pacemakers to artificial hips more expensive.

2)  Obamacare Flex Account Tax:   The 30-35 million Americans who use  a pre-tax Flexible Spending Account (FSA) at work to pay for their family’s  basic medical needs will face a new government cap of $2500. This will squeeze  $13 billion of tax money from Americans over the next ten years. (Currently, the  accounts are unlimited under federal law, though employers are allowed to set a  cap.)  This Obamacare tax provision will limit the options available to families with special needs children.

3)  The Obamacare Surtax on Investment Income: This is a  new 3.8 percentage point surtax on investment income  earned in households making at least $250,000 ($200,000 single).  This  would result in the following top tax rates on investment income of 23.8% on capital gains, 43.4% on dividends and other investment income.   While the higher Medicare taxes in 2013 only directly affect the top 2  percent of taxpayers in the country, what they mean for the rest is less  investment and slower economic growth.

4)  The Obamacare “Haircut” for Medical Itemized Deductions: Currently, those Americans facing high medical expenses are allowed a  deduction to the extent that those expenses exceed 7.5 percent of adjusted gross  income (AGI).  This tax increase imposes a threshold of 10 percent of AGI.  By limiting this deduction, Obamacare widens the net of taxable income for the  sickest Americans.  This tax provision will most harm near retirees and  those with modest incomes but high medical bills.  The deduction is often taken by people in  the middle class with high health care costs, because the higher the income, the  less likely the medical expenses will reach the (relatively high) threshold.   A  family earning  $50,000 — roughly the median household income in the  United States — that spends 15 percent of their income on medical expenses could  have deducted $3,750 under the old rules. Under the new rules, they’d only be  able to deduct $2,500.  That is a $1,250 tax increase!

The Obamacare Medicare Payroll Tax Hike: The Medicare  payroll tax is currently 2.9 percent on all wages and self-employment  profits.  Under this tax hike, wages and profits exceeding $200,000  ($250,000 in the case of married couples) will face a 3.8 percent rate instead.  This is a direct marginal income tax hike on small business owners, who are  liable for self-employment tax in most cases.  Negative effects of ObamaCare on small business have included employees hours being cut, costs passed onto the consumers or shareholders, a reduction in hiring and more out of pocket costs for larger businesses.

The health care overhaul calls for a $63 per person fee to cover the cost of  coverage for individuals with pre-existing medical conditions.  Insurance  companies forced to foot the bill are expected to pass the cost along to an  estimated 190 million Americans in the form of higher insurance premiums.  Obamacare even exacts a price on freedom of religion.  Supreme Court Justice  Sonia Sotomayor on Wednesday turned down craft retailer Hobby Lobby’s request  for a stay on the health care law’s requirement that companies pay for abortion  pills, regardless of whether that violates the owner’s moral code.

As much as Mr. Obama wishes to prove the liberal proposition that big government  knows best, the coming tax increases are likely once again to prove otherwise.  Obamacare will extract tax dollars from taxpayers nationwide and funnel them  into federal coffers in Washington. From there, legions of faceless bureaucrats  in cushy offices will decide who gets health care and how much.

The new year  will bring Americans a very clear lesson in the shortcomings of a  big-government program they opted for with the re-election of Mr. Obama.   As  their wallets get lighter, it’s a lesson they likely will regret.

← Economics 101: 2012 In Retrospect
Blacks Should Embrace Armed Security At Schools →