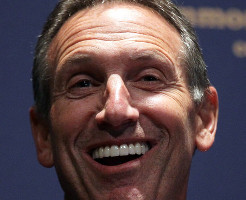 Starbuck’s CEO Howard Schultz doesn’t care  about Christians or their money, regardless of how much it could hurt  his company’s business.

Last year, Schultz announced that his company was supporting the same-sex marriage bill in the state of Washington. Schultz said at the time that believed his company’s support was “defensible, but we’re not reaching that decision to in any way offend” anyone while candidly remarking that “since we made that decision there has not been any dilution whatsoever in our business.”

But, at its annual shareholder’s meeting this year,  Tom Strohbar, a stockholder, noted that the National Organization For Marriage boycott had resulted in a significant decrease in sales.  Schultz’s, aware of Strohbar’s Christian views on marriage and his opposition to the company’s stand on same-sex marriage, told Strohbar that “if you feel, respectfully, that you can get a higher return than the 38% you got last year, it’s a free country.  You can sell your shares in Starbucks and buy shares in another company.”

It sounds like Schultz has thrown down the gauntlet.  Either you accept his political agenda or you take your business elsewhere.  Personally, I think elsewhere sounds like a good idea.

While I fully support Schultz’s right to support any political agenda he feels strongly about, I also support our  right not to do business with a company that supports political agendas that go against our Christian heritage.

Christians are not second class citizens.  It is imperative that we recognize that those who engaged in the war on Christianity are  working for the dissolution of our society and the breakdown of the family.    They are not merely attempting to dismantle the historic cultural values of this nation and move us toward a  new secular world  – they are out to destroy Christianity, period.   This war is being waged not only by Schultz but by the lapdog media, Hollywood, television, government and the political far-left and it is time that Christians take a stand for God.

“For many deceivers are entered into the world who confess not that Jesus Christ is come in the flesh. . ..  Look to yourself, that we lose not those things which we have worked for, but that we receive a full reward.  Whosoever transgresseth and abideth not in the doctrine of Christ, hath not God.  He that abideth in the doctrine of Christ, he hath both the Father and the Son.  If there come any unto you and bring not this doctrine, receive him not into your house, neither bid him God speed.  For he that biddeth him God speed is partaker of his evil deeds.”   II John:7-11

← Fighting For Gay Marriage Means Lying About The End Result
Easter or Passover – Which do you celebrate? →