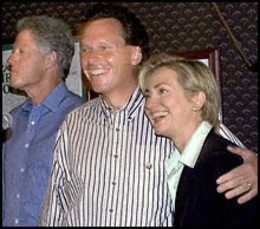 The EB-5 visa program was  created by Congress in 1990 to stimulate the U.S. economy through job creation and capital investment by foreign investors. Under a pilot immigration program first enacted in 1992 and regularly reauthorized since, certain EB-5 visas also set aside for investors in Regional Centers designated by USCIS based on proposals for promoting economic growth.  Under the EB-5 program, foreign nationals can gain U.S. citizenship for themselves and their families for a mere $500,000 investment.

According to the U.S. Citizenship and Immigration Service (USCIS), 226 regional centers have been approved to serve as conduits for EB-5 investments, attracting $6.8 billion in foreign funds to create 49,000 U.S. jobs.   But, as is typical of government programs, EB-5 investments don’t necessarily produce employment or success and often lead to fraud.

The SCC is investigating Chicago financier,  Anshoo Sethi,  on charges of defrauding more than 250 foreign investors and as such have frozen his company’s assets.   According to the SCC,  Sethi created  A Chicago Convention Center and Intercontinental Regional Center Trust of Chicago  (ACCC) and fraudulently sold more than $145 million in securities and collected $11 million in administrative fees from investors, primarily from China, while duping investors into believing that by purchasing interests in ACCC, they would be financing construction of the World’s First Zero Carbon Emission Platinum LEED certified hotel and conference center near Chicago’s O’Hare Airport and purchasing U.S. citizenship through the EB-5 immigrant investor program.

Virginia Democratic gubernatorial candidate Terry McAuliffe and  Anthony Rodham, Hillary Clinton’s brother used a similar EB-5 operation to raise cash from foreigners in order to launch a new automobile manufacturing company.    McAuliffe was the former chairman of the Democratic National Committee and chief fundraiser for Hillary’s 2008 presidential bid.   According to a financial advisor,  McAuliffe’s operation was also a fraud.

To kick-start Green Tech Automotive  in Mississippi,  McAuliffe and Rodham  sought funding through federal Eb-5 visa program.   Documents obtained by Watchdog.org show that, in their 2009 analysis of the project,  Virginia officials warned Gov. Tim Kaine about the project.  Allowing Green Tech to proceed with EB-5 funding in that state “would cause some to conclude that the commonwealth knew, or should have known, that there were problems, but proceeded nonetheless.”

McAuliffe said that his company, Green Tech Automotive would build “neighborhood electric vehicles” that were slightly bigger and  faster than golf carts.  The GTA website touts “Green Jobs Made in the USA,” but, in fact, few U.S. jobs and fewer cars were created.  McAuliffe, in his agreement with Mississippi, pledged to hire 350 full-time workers by the end of 2014 but officials in Mississippi say up to $20 million reputedly raised through  Gulf Coast Funds Management has yet to be delivered to Green Tech automotive.

GreenTech’s conduit for EB-5 investors was Gulf Coast Funds Management Ltd,  a regional center authorized by  USCIS.   Gulf Coast Funds Management’s CEO just happens to be Anthony Rodham.    A group of political associates of Hillary and Bill Clinton, including  Clinton’s  former IRS commission,  just happen to serve on the board of directors.     Small world ain’t it!!!!

Watchdog.org,  also  uncovered a second EB-5 funding operation,  the Virginia Center for Foreign Investment and Job Creation, that shares the same McLean, Virginia, address as Gulf Coast Fund Management.   McLean is McAuliffe’s adopted hometown and Anthony Rodham is listed as the registered agent.   None of the privately held companies has publicly disclosed their financial records.

The Tysons Boulevard address listed by Green Tech and Rodham’s two regional centers as their headquarters in Virginia, are  locked, the nameplate stripped off the door and offices dark and empty.  But, a Watchdog reporter found  another office in a less prestigious building whose interior walls were pasted with pictures of McAuliff’s “MyCar” occupied by a lone receptionist.

According to the Fairfax County Department of Tax Administration neither regional center had yet paid its business license fees for 2013.  Gulf Coast Fund Management was also delinquent on its 2012 license.    County tax director Kevin Greenlief said his staff was looking into the situation.  Michael Gibson, managing partner with U.S. Advisors, which administers the EB-5 program said that Green Tech’s funding program smacks of “fraud.”

Apparently the USCIS is continuing its agenda of ignoring misrepresentation and fraud.  Their spokesman Christopher Bentley said that they may be “getting ready to issue Notices of Intent to Revoke to some regional centers.”  Not prosecute – revoke!

Imagine – Democrats, especially progressive Democrats, linked at the hip to  he Clintons and Obama, attempting to defraud the government.  Who’d have thunk?