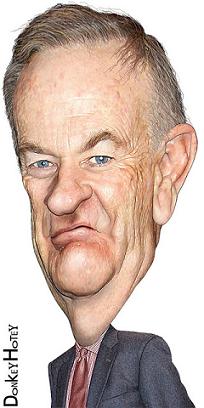 I must admit up front that I have never been a big fan of Bill O’Reilly – he comes across as a pompous bully, no matter which side of the fence he throws his hat.  Being a pompous bully doesn’t mean he doesn’t have a right to his opinions.

But, he went a bit to far this time when he  insulted Christians who revere the World of God by claiming  that we haven’t been able “to do anything but thump the Bible” in making our  case for traditional marriage.

Webster’s Dictionary describes a bible thumper as “an overzealous advocate of Christian fundamentalism,” and I’ve known a few of these individuals.  But O’Reilly seems to lean toward The Urban Dictionary description of a bible thumper as “one who uses the Bible to attack/defame others’ characters instead of as a guide to proper living, tending to be ignorant of anything else except the Bible and behavior as expected by the religious.”

In order to get the bible thumping out-of-the-way,  the bible does define marriage as the union of one man and one woman.  After all, God created Eve for Adam, not Steve for Adam.  God also abhors the sin (the act) of homosexuality.  That is not being overzealous nor is it defamation of one’s character.    It is a statement of fact from one who reveres the World of God.

As a Christian I accept that there are those on the left who prefer to think of God as a religious delusion  and I have no problem with that.   That is between them and God.   Adults are free to make choices about their relationships and their beliefs  and they do not need Christian approval or government sanction or license to do so.   All Americans have the freedom to live as they choose as long as it does not infringe upon the liberty of others.

O’Reilly has chosen to belittle Christians and show his ignorance of the real issues surrounding the left’s agenda to redefine marriage.

A study published by the left-leaning research institution Child Trends concluded that “it is not simply the presence of two parents but the presence of two biological parents that seems to support children’s development.  Research clearly demonstrates that family structure matters for children, and the family structure that helps children the most is a family headed by two biological parents in a low-conflict marriage. . .”

Marriage exists to bring a man and a woman together as husband and wife to be father and mother to any children their union produces. It is based on the anthropological truth that men and women are different and complementary, the biological fact that reproduction depends on a man and a woman, and the social reality that children need both a mother and a father.  Marriage predates government. It is the fundamental building block of all human civilization. Traditional marriage has public purposes that transcend its private purposes.

Redefining marriage does not simply expand the existing understanding of marriage.   It rejects and then replaces the anthropological truth that marriage is based on the complementarity of man and woman, the biological fact that reproduction depends on a man and a woman, and the social reality that children need a mother and a father.  Redefining marriage to abandon the norm of male–female sexual complementarity would also make other essential characteristics—such as monogamy, exclusivity, and permanency—optional.  Marriage cannot do the work that society needs it to do if these norms are further weakened.

The United States Supreme Court has said that marriage is “fundamental to the very existence and survival of the human race.”

The noted British philosopher Bertrand Russell, a liberal anti-war activists and socialist said “But for children, there would be no need of any institution concerned with sex. . . It is of children alone that sexual relations become of importance of society, and worthy to be taken cognizance of by a legal institution.”

Many people mistakenly believe that proposals to allow same-sex marriage are about allowing a new, different and separate form of marriage to coexist alongside traditional marriage. They envision it as a different expression of the same marriage institution they have always known.

Under the law, one definition of marriage could not exist alongside the other.  Only one of the competing definitions would legally exist.  A Harvard Journal of Law and Public Policy review noted that “. . .once the judiciary or legislature adopts the union of any two persons as the legal definition of civil marriage, that conception becomes the sole definitional basis for the only legal sanctioned marriage that any couple can enter into, whether same-sex or man-woman.  Legally sanctioned genderless marriage, rather than peacefully coexist with traditional one man-one woman marriage, actually displaces and replaces it.”

David Blankenhorn, president of the Institute for American Values and a self-described liberal Democrat, said of marriage: “Marriage is a gift that society bestows on its next generation.  Marriage (and only marriage) unites the three core  dimensions of parenthood – biological, social and legal – into one pro-child form: the married couple.  Marriage says to a child:  The man and woman whose sexual union made you will also be there to love and raise you.  Marriage says to society as a whole:  For every child born, there is a recognized mother and father, accountable to the child and to each other.”

The homosexual agenda to redefine marriage is not about marriage.  Their only objective is the mandated acceptance and approval of homosexuality and homosexual ideology.  Someone needs to enlighten Mr. O’Reilly.  But for God’s sake – don’t bloviate!